Forces loyal to Libya's unity government have launched a counterattack to keep rival fighters from advancing on the city. European calls for an urgent ceasefire have been rejected by Moscow and Washington. 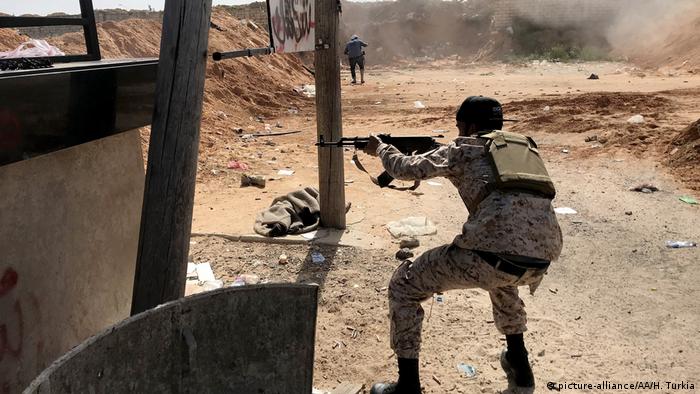 Fresh clashes broke out in the Libyan capital's southern districts on Saturday as the yearslong conflict between the country's rival governments intensified.

Tripoli residents described hearing rocket and shellfire in several districts, this was part of a counterattack by forces loyal to the Government of National Accord (GNA) against military strongman Khalifa Haftar's fighters.

Explosions shook the Libyan capital Tripoli late on Saturday after an air strike, residents said and Reuters reported. It was unclear if the strike was carried out by a manned aircraft or a drone.

"We have launched a new phase of attack. Orders were given early this morning to advance and gain ground," said Mustafa al-Mejii, a spokesman for the GNA forces.

Several airstrikes were carried out against military positions held by Haftar's self-styled Libyan National Army (LNA) some 100 kilometers (60 miles) southwest of the capital, according to the GNA's military spokesman Colonel Mohamad Gnounou.

The LNA, for its part, said its fighters were "taking control of several new positions on the front lines in Tripoli."

Saturday's counterattack follows the launch of Haftar's offensive on April 4 against the Tripoli-based GNA when several days of intense fighting ensued. Haftar's fighters have, however, failed to breach the southern defenses of the city.

Haftar's offensive has revealed contrasting positions towards Libya, with the United States and Russia, for once, on the same side.

Moscow and Washington have refused to support a United Nations Security Council resolution calling for a ceasefire. Germany and France back the British-drafted text.

Russia has refused to blame Haftar for the latest flare-up in violence. US President Donald Trump, however, appeared to embolden Haftar by reaching out personally to the strongman in a phone call earlier this week.

The White House said Trump and Haftar spoke on Monday "to discuss ongoing counterterrorism efforts and the need to achieve peace and stability in Libya."

Washington has not given a reason for its decision not to support the UN text, which would also call for unrestricted humanitarian aid access in Libya.

Libya has been mired in chaos since the NATO-backed uprising that toppled and killed dictator Moammar Gadhafi in 2011.

As well as the rivalry between the GNA and the LNA, a myriad militias have vied for control of key cities, alongside periodic jihadi activity.

Libya has halted its security cooperation with France after accusing Paris of supporting military strongman Khalifa Haftar. France has denied the claims, insisting it wants a political solution in Libya. (19.04.2019)

The council has failed to agree on a joint call for a ceasefire in Tripoli, where rival militias have been fighting for two weeks. Germany, the current council president, has called for a meeting to discuss the conflict. (18.04.2019)