Humanitarian group SOS Mediterranee says it has relaunched migrant rescues off Libya, seven months after it was forced to abandon its activities. The new mission comes after a standoff between Italy and Sea-Watch 3. 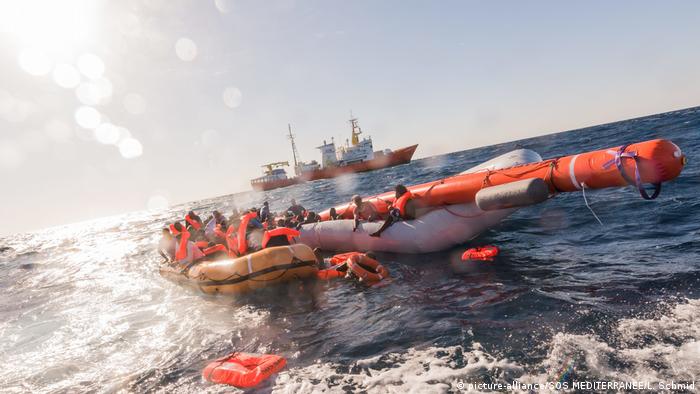 The charity SOS Mediterranee announced Sunday it would deploy a new vessel to "conduct search and rescue activities" off the coast of Libya.

The operation comes amid growing concerns for people attempting the perilous Mediterranean Sea crossing from the conflict-hit North African country.

The Norwegian-flagged Ocean Viking, funded in partnership with Doctors Without Borders (MSF), is expected to arrive in the central Mediterranean at the end of the month. The 69-meter (226-foot) cargo ship has 31 crew members and can hold up to 200 migrants.

The charities reported there were almost no rescue vessels patrolling the Mediterranean, where at least 426 people have died so far this year, according to the International Organization for Migration.

SOS Mediterranee said these migrants were attempting "to escape the escalating conflict in Libya and the deplorable conditions of Libyan detention centers."

SOS Mediterranee and MSF were forced to stop using their previous rescue vessel, Aquarius, in December. At the time, the charities cited a series of legal issues, which they blamed on hostility from some European governments towards their work.

In recent weeks there have been repeated confrontations between Italy's populist government and other charities seeking to bring rescued migrants ashore. Last month, the captain of German charity ship Sea-Watch 3, Carola Rackete, was arrested after she docked with 40 migrants at the port of Lampedusa without permission.

"Our presence at sea is to save lives. We hope that the countries will understand and join with us as there is no other solution in the central Mediterranean," head of operations at SOS Mediterranee, Frederic Penard, told the Agence France-Presse news agency. "Even without the boats, the departures continue and a huge number of drownings are reported."

Libya descended into war after the 2011 uprising that killed dictator Moammar Gadhafi. It has long been a key departure point for people from other parts of Africa hoping to make it to Europe.

A German rescue boat has picked up 44 people that were stranded off the Libyan coast. The rescue comes a day after the same boat handed over 65 migrants to Malta. (08.07.2019)