Italy has allowed a coast guard vessel carrying some 130 rescued migrants to dock in Sicily. But it says they must not disembark until other EU nations agree on their redistribution among the bloc's member states. 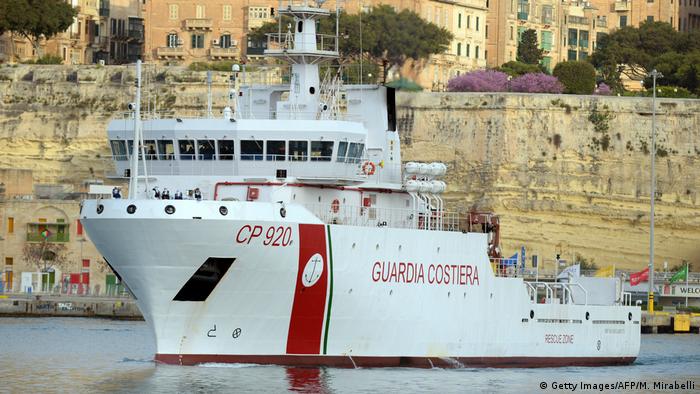 An Italian coast guard vessel carrying some 130 migrants rescued in the Mediterranean has finally been allowed to dock in Sicily, but its passengers will not be allowed to leave the ship until Brussels decides on which countries will take them in, Transport Minister Danilo Toninelli said on Sunday.

The EU had to give a clear response "because the migration issue concerns the whole continent," Toninelli said in a statement.

His words echo those of hard-line anti-immigration Interior Minister Matteo Salvini, who had previously not allowed the ship to dock, while insisting on Friday that other EU countries had to commit to take in the migrants before they would be allowed to disembark on Italian territory.

The ship, the Gregoretti, was given permission to dock in the Sicilian city of Augusta overnight to Sunday after six migrants were taken for medical treatment to the island of Lampedusa and a pregnant woman and her family were allowed to leave the vessel on Saturday.

The migrants were rescued from two rubber dinghies on Thursday evening after they got into difficulties after sailing from Libya. The rescue came on the same day that 110 other migrants are thought to have died at sea off the Libyan coast in what has been called "the worst Mediterranean tragedy."

The EU is struggling to find ways to deal with the problem of migrants, mostly from Africa, who seek to reach Europe via the perilous route over the Mediterranean. In recent months, Italy has refused several times to allow rescue ships to dock until it is clear how the migrants they are carrying will be redistributed in the EU. This has led to ships carrying rescued and often exhausted migrants spending days or weeks at sea.

Italy is one of the European nations to bear the brunt of a mass influx of migrants coming over the Mediterranean, many of them fleeing conflict or poverty in their home countries.