Doctors Without Borders and SOS Mediterranee, which operate the new migrant rescue ship, say the mainly Sudanese men and adolescents were picked up off the coast of Libya during three rescue missions. 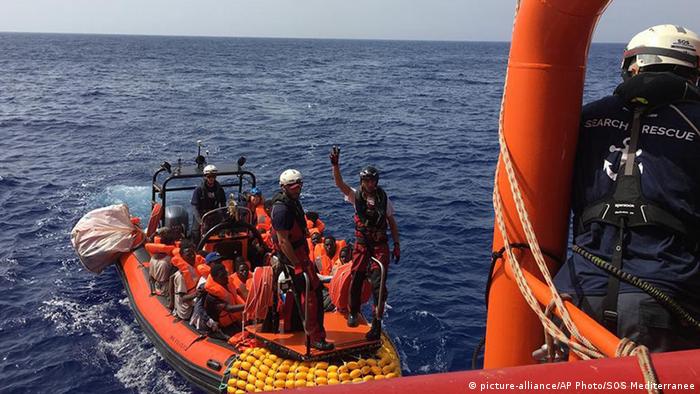 The Ocean Viking migrant ship rescued 81 people from an unseaworthy rubber boat on Sunday, according to Doctors Without Borders (MSF). There are now 251 people on board following three rescue missions in the Mediterranean Sea off the Libyan coast.

The Norwegian-flagged ship had already picked up 85 migrants on Friday and another 80 on Saturday during its first two rescue missions, before Sunday's operation. The 69-meter (226-foot) cargo ship has 31 crew members and can comfortably hold up to 200 migrants.

A second migrant ship, the Open Arms, remained at sea on Sunday with 121 migrants on board after being denied permission to enter ports in Italy and Malta.

Malta took a more lenient approach, offering to allow Open Arms to disembark 39 people it rescued in the country's designated search-and-rescue area on Saturday, but rejected 121 migrants who had been picked up more than a week ago "in an area where Malta is neither responsible nor the competent coordinating authority."

"We cannot evacuate 39 people and tell the rest that they have to stay," Open Arms founder Oscar Camps said.

Camps indicated he would wait for the "definitive evacuation" for security reasons, and "to keep order on the boat."

"Italy is not a refugee camp for Europe. Go either to Spain or Norway," he told Italian media.

A new Italian law permits fines of up €1 million ($1.1 million) against the owners of charity rescue ships that enter Italian waters without authorization.

Germans march in solidarity with Sea-Watch

Thousands of people took to the streets in cities across Germany to support Carola Rackete and the Sea-Watch rescue group. (06.07.2019)