Save the Children: ′Restart search and rescue operation′ | Europe| News and current affairs from around the continent | DW | 19.04.2015

The staggering death toll in the Mediterranean's latest migrant boat shipwreck has prompted calls for a new EU response. DW spoke to Save the Children's Sarah Tyler about the dire conditions migrants face. 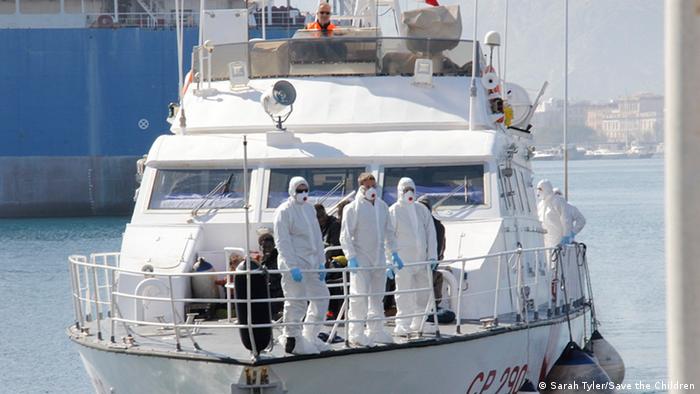 A ship carrying 700 migrants capsized off the coast of Libya. It's been described as the deadliest disaster to date in the Mediterranean. It's the third boat that has capsized in a little over a week, and if the death toll from this latest tragedy is confirmed, the number will have risen to more than 1,600 just this year.

DW: Most migrants try to make it to Europe in the warmer summer months. Why are the numbers so exceptionally high this year?

Sarah Tyler: What Save the Children is seeing are increasingly worsening conditions in Libya and also in countries across sub-Saharan Africa. And let's not forget the conflict in Syria. So as tensions fuel, as oppression grows, we're seeing the numbers rise.

Are more people dying at sea because Italy has abandoned its Mare Nostrum search and rescue operation?

Tragically, the number of deaths may increase because of the increasing violence in Libya, which is pushing more people to cross the Mediterranean. Also, the boats that they are in, we have got to remember, are rubber dinghies, or they are cobbled-together wooden boats that cannot withstand the Mediterranean Sea.

Save the Children has spoken to people it has rescued at sea. Did they tell you why they decided to embark on this dangerous journey?

One of the most horrific stories - and actually one I followed up with yesterday - is a mother with her 15-month-old baby. This baby was one of the victims from a gas thermometer explosion in Libya. And this child was not given treatment. The smugglers decided the 22 people that were hurt were not going to get the treatment they needed, so this baby went six days without treatment, and two days were spent on a boat in the open sea.

We've also heard reports from children that the boat they were in was shot at by traffickers to make sure the boat left Libya. 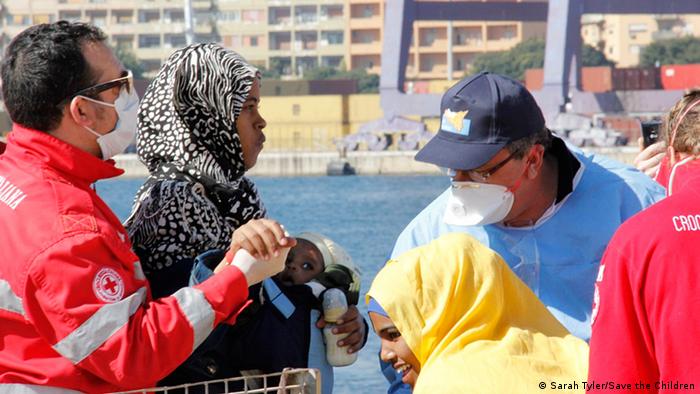 Most migrants are extremely dehydrated when they come ashore; some don't even know where they've landed, Tyler says

Did they tell you what they'd been promised by human traffickers when they boarded the boat?

We've heard from children that traffickers guarantee safe travel to a European country. Some children we've met don't even know where they are going.

Some of them are coming to Europe because they've seen [pictures of] Germany on Facebook. Some children have families in Norway, Germany or Switzerland.

Who is steering these boats? Are the traffickers actually on the boat with them or are they just being loaded on unseaworthy boats and then just left to fend for themselves?

We've heard both accounts. Sometimes the traffickers are on board, but then they get on a fishing boat and leave them in the open sea.

Exactly. It's almost guaranteed that there is no water and no food for the migrants. Basically, this is a death sentence.

How many days do they usually spend on these boats?

Mostly it's about two days, but I've heard between two and six days. 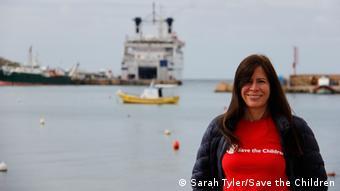 Save the Children's Tyler witnessed the landing of 93 migrants in Palermo, Sicily, on Saturday

How do Italian authorities find people at sea and what happens to them once they've been rescued?

Well, there's different scenarios. The 17-year-old I spoke to yesterday said he was on a boat for two days and they called for emergency help - emergency help meaning that a boat nearby could come and pick them up.

But no one could find them. That's why it's so important to restart the search and rescue mission, which is much more efficient than what the system is now.

And I must say I was incredibly impressed with the Italian authorities. I was in the harbor when 93 migrants came in [yesterday] and there was immediate support for them. They were given water; they were given food. They were taken to a shady place. They were helped into an ambulance. There was one minor who fainted when he landed at the port, and he was immediately taken to hospital.

What medical state are these people in when you see them after they've come to shore?

They have no energy. They are extremely dehydrated. Some have very bad burns on their skin from the sun.

Some say such rescue missions act as a pull factor in the sense that they encourage more people to make this dangerous journey. What's your take on that?

Save the Children believes that because of the violence they've experienced during their trip to Libya, children fleeing the violence in their home countries, that migration will continue.

Sarah Tyler is communications manager for the NGO Save the Children and spoke to DW from Palermo, Sicily.