More than 40 migrants have drowned after the small boat carrying them sank in Mediterranean, between Libya and Italy. Four survivors told Italian police that 45 people had been on board. 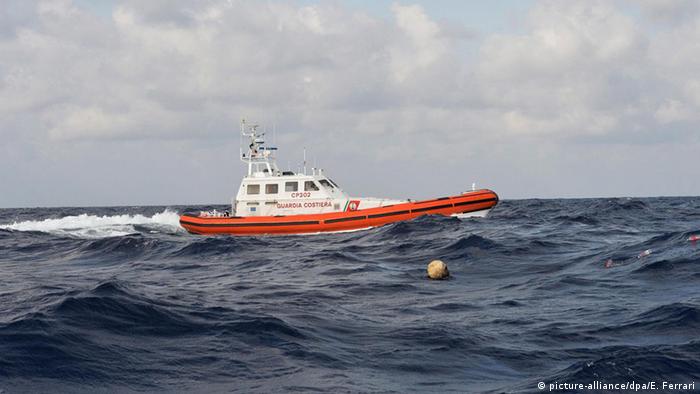 The International Organization for Migrants (IOM) based in Geneva said 41 migrants were feared drowned in a new Mediterranean shipwreck, citing survivors picked up by the Italian navy vessel "Foscari."

The survivors - two Nigerians, a Ghanaian, and one Nigerien - were rescued after a helicopter spotted them floating in the sea. They arrived in the Sicilian port of Trapani on Thursday, together with 600 other migrants.

The four survivors told Italian police that their inflatable vessel carrying 45 people had sunk on the crossing from Libya.

According to the IOM aid agency, the ship had left Tripoli in Libya on Saturday and stayed adrift for four days.

Roughly 10,000 people have been rescued trying to reach the Italian coast in recent days.

No funds or political support?

Italy pleaded for more help to rescue migrants, also demanding a "clear answer" from the European Union about where the refugees should be accommodated.

But the European Commission said on Thursday that it doesn't have funds or political support to launch search and rescue operations in the Mediterranean Sea.

Earlier on Thursday, Italian police confirmed they had arrested 15 African Muslim migrants after witnesses said they had thrown 12 Christian passengers overboard following a brawl on a boat heading to the Italian cost.

Greece overwhelmed by influx of refugees

The Greek government has surrendered in the face of a massive influx of refugees from the Middle East. It has even issued threats directed at the Europe Union, only to withdraw them hastily. (16.04.2015)