Greece overwhelmed by influx of refugees | Europe | News and current affairs from around the continent | DW | 16.04.2015

Greece overwhelmed by influx of refugees

The Greek government has surrendered in the face of a massive influx of refugees from the Middle East. It has even issued threats directed at the European Union, only to withdraw them hastily. 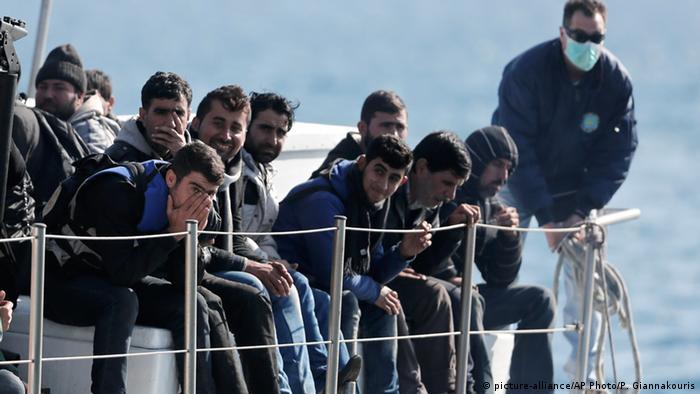 In the wake of a crisis meeting set up by Prime Minister Alexis Tsipras on Tuesday , an announcement by government spokesman Gavriil Sakellaridis caused quite a stir: Asylum seekers from Syria would be provided immediately with the legally required travel documents, enabling them to continue the journey to their prefered country of destination in western Europe, the prime minister's aide declared.

This came across as an implementation of a previous threat issued by Greek left-wing politicians, according to which Greece would simply open its borders and let hundreds of thousands of refugees flood into other EU countries, if the latter were not prepared to admit more immigrants.

A few hours later, however, the announcement was corrected. "Asylum seekers from Syria will be provided immediately with the legally required documents," the corrected version of the government declaration stated briefly. All further specifications with respect to "countries of destination" within the EU or "travel" documents had been dropped.

What had happened? According to information received by "Skai" TV station, the Greek government wanted to avoid creating the impression that it did not fulfil its commitments under the Schengen agreement - hence the belated correction. 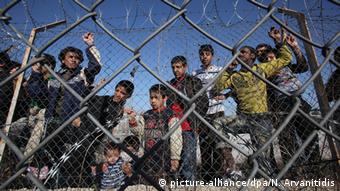 Greek borders are also the external borders of Europe

But how could the government spokesman be tempted into issuing such a seemingly thoughtless statement? Presumably, due to a lack of experience, says Angelos Syrigos, assistant professor for international law and foreign policy at Panteion University in Athens.

In any case, the initial statement by Sakellaridis did not match the facts, criticized Syrigos. Talking to DW, he explained: "If someone applies for political asylum, they must not receive any travel documents prior to assessment of their asylum status, which can take quite a long time, depending on the circumstances."

Since December 2014, 262 refugees have received valid travel documents for a passage to other EU countries, reports the Athens-based "Ethnos" newspaper, adding that further applications were currently being examined.

According to "Ethnos", a "new surge of migrants" is flooding into Greece, an assumption which seems to be corroborated by Greek Coast Guard statistics for the first quarter of 2015: Compared to the same period the previous year, the number of refugees who entered Greece from Syria and other countries via Turkey has almost quadrupled. "Although strong winds continue to prevail in the eastern Aegean, the number of arriving refugees has increased sharply. If this trend continues, we will be facing record numbers at the height of summer," warned Syrigos.

The lawyer can claim intimate knowledge of the refugee problem: Until recently, the 49-year-old served as general secretary in the Athens interior ministry. As usual, after a change of government in Greece he had to give up his post. He may not be familiar with the policies of the Syriza party now in power.

However, Syrigos does not believe that the new Greek leaders are trying to instill fear of refugees in order to divert attention from their own wrongdoing, or economic problems in Greece. The challenge of coping with an increasing number of refugees is real, it cannot be overlooked, said the lawyer, adding: "From my point of view, the refugee debate is not a diversion, but an additional burden for the government. When they were in the opposition they had made a lot of promises, including acceptance of refugees and asylum seekers. Now, there is a huge gap between their aspirations and reality." 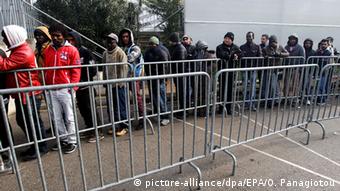 The number of refugees entering Greece has increased sharply

The extent to which the refugee debate is emotionally charged within the left-wing camp is shown by Syriza lawmaker Yannis Micheloyannakis' commitment: at the end of 2014, the left-wing politician - then a member of the opposition - supported a sit-in protest and hunger strike by Syrian refugees, who tried to enforce their right to asylum. In a symbolic move, Micheloyannakis even joined the hunger strike for a couple of days. Nowadays, the government politician tells "Skai" TV broadcaster that he calls for a swift modification of European asylum regulations, even roping Greek EU commissioner Dimitris Avramopoulos in to this end: the commissioner had to drive home to the Europeans that Greece's borders are also the external borders of Europe. After all it was also thanks to Syriza that Avramopoulos held his EU post, claimed the eloquent politician from Crete.

For a long time, Athens has been pushing for a reform of the European Dublin III regulation, which states that an EU member is responsible for those asylum seekers who first enter the EU in that country.

Like many heads of government before him, Prime Minister Tsipras calls for an even distribution of refugees across all EU member states. Otherwise, Greece would turn into a processing camp for migrants, Tsipras complained to EU Home Affairs commissioner Avramopoulos when he last visited Athens. However, international law expert Syrigos believes that Tsipras' demand is hardly realistc: a modification of the Dublin III regulations required unanimity among member states and was thus very unlikely, the lawyer said. The only way out for Greece, he continued, is an application for financial support from the European asylum and migration fund.

Lagarde: No grace for Greece on repayment delay

International Monetary Fund chief Christine Lagarde has rebuffed talk of Greece obtaining a delay on its debt payments to the Fund. Her remarks came at a meeting with the World Bank in Washington. (16.04.2015)

Athens has sunk deeper into junk territory after ratings agency S&P once again cut its credit rating. Pressure is on to strike a deal with its international creditors, but time's running out and patience wearing thin. (15.04.2015)

Schulz: up to EU to find 'comprehensive solution' on refugees

In the wake of the latest migrant boat tragedy in the Mediterranean, European countries are being urged to do more to save refugees fleeing conflict. The issue is being debated in Germany. (15.04.2015)