Calling on Europe to act to prevent next disaster in the Mediterranean | Europe| News and current affairs from around the continent | DW | 15.04.2015

Hundreds of migrants en route to Europe died in the Mediterranean after a boat capsized off the Libyan coast, survivors told UN's refugee agency. Death tolls could rise further as most people try to cross sea in summer. 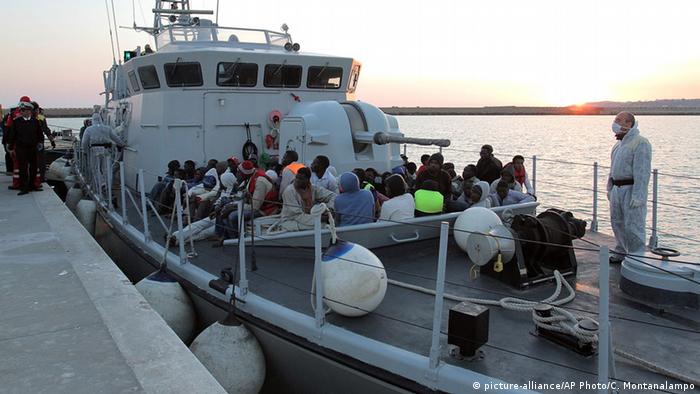 According to survivors who were rescued from the capsized vessel off the Libyan coast, the boat carried 550 people who were trying to make it to Europe. Some 140 people were rescued by the Italian Coast Guard. Nine bodies were found.

The remaining 400 people on the boat are missing and presumed dead, said William Spindler, spokesman for the UN's refugee agency UNHCR.

The UNHCR spoke to survivors when they disembarked at Reggio Calabria in southern Italy on Tuesday. According to reports by survivors, the crammed boat capsized when a commercial vessel, which had been alerted by Italian authorities, approached the migrants. The boat capsized about 80 miles (128 km) south of Lampedusa, where in a similar incident 600 people had died at sea in 2013, Spindler said.

"When the boat approached the refugees, they became very agitated and moved to one side of the boat," Spindler told DW. "They were hoping to be rescued."

According to figures by the UNHCR, the latest tragedy takes this year's known death toll to 900.

"Last year, during the same period, there were about 17 people reported dead or missing. So we are talking about a huge increase from last year," Spindler said.

As most of the crossings occur during the summer months, the numbers are likely to go up. "The traditional crossing season - it's a yearly phenomenon - has really just begun," Judith Sunderland of Human Rights Watch told DW.

"An unprecedented number attempted the crossing even during the winter months under the most adverse weather and sea conditions. So everything suggests, as the weather improves and as the situation in Libya deteriorates further, more and more people will attempt the crossings," Sunderland said.

Human rights groups have long said the EU needs to come up with joint solutions for the crisis in the Mediterranean.

The UNHCR has identified two reasons for the hike in fatalities. Italy's Mare Nostrum rescue mission was abandoned in favor of surveillance patrols by EU border agency Frontex - Triton. And the number of people crossing has gone up as the political situation in Libya deteriorates.

Mare Nostrum "has been replaced by much smaller-scale operations that don't have a mandate to search-and-rescue for people. The mandate is to patrol the sea borders of Italy," Spindler said.

Mare Nostrum has been credited with having saved over hundreds of thousands of lives last year.

But instead of praising Italy for shouldering a huge burden by itself, Italy's Mare Nostrum mission has been criticized by other EU countries, says Sunderland, "arguing that it presented a pull factor, that it convinced people to take to the sea as opposed to supporting Italy's efforts to save lives."

Amnesty International criticized Europe for not doing enough in terms of search-and-rescue efforts. "Leaders in London, Paris, Berlin and other European capitals must admit that the current strategy isn't working and throw their full weight behind a robust and concerted humanitarian operation in the Mediterranean, with at least the same resources as the Italian Mare Nostrum operation, which was shut down last year," Amnesty International's Gauri Van Gulik said in a statement.

The UNHCR said there needed to be a joint European reaction. "This problem is beyond the means of a single country. So we would like the European Union to show some leadership and coordinate a European response," Spindler added.

In addition to beefing up its search-and-rescue mission, Europe should also look into providing legal alternatives for refugees to come to the continent, Spindler urged. "In the past, this route was used by economic migrants to come to Europe, but in the last few years, we've seen that the proportion of refugees has increased. Last year, more than half of those people making the crossing were refugees coming from places like Syria and other countries experiencing conflict."

Spindler said Germany had taken the lead in taking in some 30,000 Syrians. Sweden had also allowed refugees to come to the country: "We would like more of these initiatives to take place in Europe."

Once again, after a long break, the EU is seeking more intensive cooperation with the southern Mediterranean countries in the collective campaign against terrorism. Barbara Wesel reports from Barcelona. (13.04.2015)