A young Saudi woman was locked up by her family for half a year for refusing a forced marriage. She finally managed to escape to Thailand. Her case has made a splash on social media — but she's not the only one. 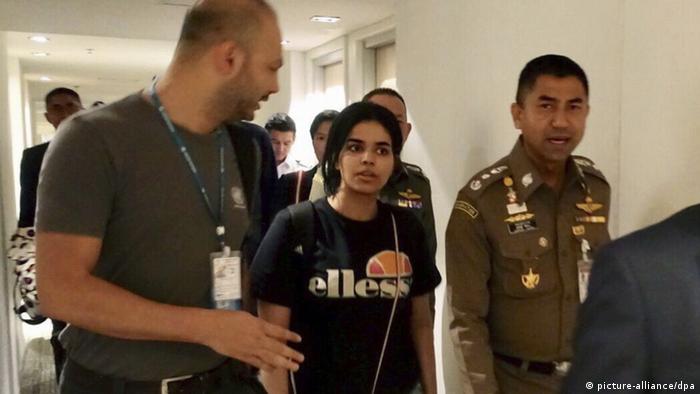 Rahaf Mohammed Alqunun has reason to hope: It now appears that Thai authorities will not deport her to Saudi Arabia. The young Saudi woman waited in a hotel at Bangkok for an entire day without knowing where she was going next. Back to Riyadh, as the Saudi embassy in Bangkok demanded? Or on to Australia, her actual destination, where she can expect support among others from Human Rights Watch (HRW)? She wants to go to Australia to get away from her family, which locked her up for six months because she refused to agree to a forced marriage.

HRW Middle East expert Adam Coogle welcomed the fact that the Thai authorities did not put her on the flight back to Kuwait as initially intended. The Thai immigration authorities had first declared they would not send the young woman back to Kuwait. From there, she would presumably have been transferred to Saudi Arabia. Then the deputy prime minister's office said Thailand wanted to deport the woman after all. Finally, staff of the United Nations Refugee Agency (UNHCR) were allowed to meet with Rahaf Mohammed Alqunun, Coogle said.

Not a singular case

Alqunun is not the first young woman to try to flee Saudi Arabia. In April 2017, Dina Lasloom, a young Saudi citizen, was arrested at Manila airport; she, too, wanted to avoid a forced marriage.

She was deported to Saudi Arabia the next day; her whereabouts are unknown. According to Bloomberg news agency, citing an unnamed source in the Saudi government, Lasloom is being held at a women's prison. Saudi human rights activist Moudi Aljohani believes she is dead. HRW has no authoritative information on Lasloom's fate.

"We have documented several such cases over the years," Coogle told DW. "Again and again, women in Saudi Arabia are mistreated and denied a self-determined life because the male members of their family want to be in control." Some women tried to escape this rule by fleeing abroad.

Reforms needed 'from within'

Alqunun's case is extraordinary, said Saudi journalist Arafat Al Majed, a member of Qatif city council. "It would be unfair to say that Alqunun stands for her entire generation," Al Majed told DW. The young woman decided to turn against her family, she said, adding that it happens — "but not too often." The laws on how to handle such cases are currently being reformed, she said. "It would be best if the kingdom did this on its own, Al Majed added. "Pressure from the outside is counterproductive," she argued, saying that many Saudis are in favor of reform.

Women can't depend on the state

For quite some time, people would say Crown Prince Mohammed bin Salman was the guarantor for change — but wrongly so, said Saudi civil rights activist Yahya Assiri, who lives in England. There are no reforms, even if there has been some movement, she said, adding that it is mainly propaganda aimed at improving the image of the kingdom. Releasing and listening to Saudi dissidents and activists would be a first step, but that is not happening, she said.

Young women are not sufficiently protected from their families, Assiri explained. The state should provide protection, but if it doesn't, women are forced to choose a different path, she said — such as fleeing abroad. "Even then, the state will not help them; instead it tries to bring them back to Saudi Arabia."

Often enough, Saudi Arabia is a step ahead of the human rights organizations and the countries where the women take refuge, Assiri said, explaining that Saudi Arabia used its money, its influence and contacts to make sure Alqunun was detained.

The women are more or less left to their own devices. Their chances of escaping depend to a large extent on the chosen route, Adam Coogle said. Some of the women who managed to enter a country with a well-developed asylum system, such as a European country or the USA, were successful, he said, while some of the women who tried to escape to Australia were intercepted in the countries where Saudi Arabia can exert diplomatic pressure.

Women in Saudi Arabia are stepping on face veils and posting photos of the act on social media, with some telling how they were forced to cover their face in the conservative kingdom. Others have condemned the campaign. (29.12.2018)

Saudi officials have arrested two award-winning women's rights activists, who have been campaigning for years to end the male guardianship system in the Islamic kingdom. This comes despite Riyadh's recent social reforms. (01.08.2018)