Saudi Arabia says Lebanon has declared war against it

The Saudi kingdom fears that Iran-backed Hezbollah is seeking to consolidate power in Lebanon. Saudi Arabia and Iran have also traded accusations over Saturday's attempted missile strike on Riyadh by Yemeni rebels. 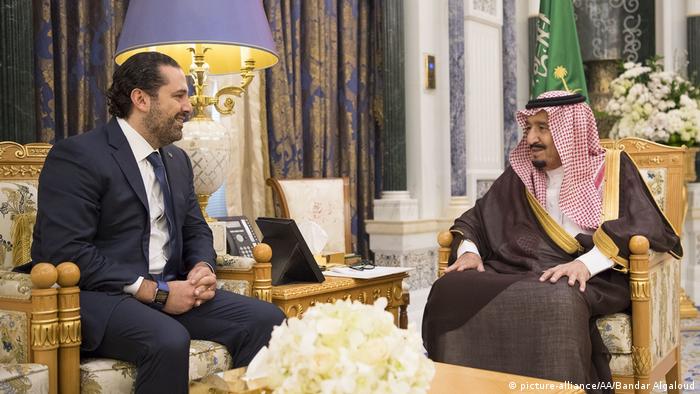 With Iran-backed Shiite militant group Hezbollah apparently seeking to gain from Lebanon's political instability, Saudi Arabia responded on Monday by claiming that the new Lebanese powers that be had declared war on the oil-rich kingdom.

In an interview with Saudi state television, Riyadh's Gulf affairs minister, Thamer al-Sabhan, said the Lebanese government would "be dealt with as a government declaring war on Saudi Arabia."

Hezbollah's acts of "aggression," Sabhan added, "were considered acts of a declaration of war against Saudi Arabia by Lebanon and by the Lebanese Party of the Devil."

The alleged declaration comes after Hariri, a Sunni ally of Riyadh who holds both Saudi and Lebanese citizenship, claimed that there had been an assassination plot against him in Lebanon, forcing him to flee to Saudi Arabia, from where he announced his resignation in a broadcast.

While the exact motive behind his resignation remained unclear, the move toppled Lebanon's factious coalition government, which also included Hezbollah, and plunged the country into a political crisis.

It also brought Lebanon back to the forefront of Iran and Saudi Arabia's regional rivalry, which has played out in Syria, Iraq, Bahrain and Yemen.

Riyadh and Tehran's strife was once again laid bare on Monday, as the two powers traded fierce accusations over last weekend's attempted missile attack on the Saudi capital, which is believed to have been fired by Yemen's Houthi rebel group.

The Saudi-led military coalition, which is combating the Iran-backed rebel faction in Yemen, said that it reserved the "right to respond" after Saudi forces on Saturday intercepted a ballistic near Riyadh's international airport.

The Saudi-led military coalition called the attempted strike a "blatant military aggression by the Iranian regime which may amount to an act of war," while Saudi Foreign Minister Adel al-Jubeir warned on Twitter that "Iranian interventions in the region are detrimental to the security of neighboring countries and affect international peace and security."

Iran's foreign ministry spokesman Bahram Ghassemi was quoted of saying that Saturday's missile attack was an "an independent action in response to (Saudi) aggression," and that Iran had nothing to do with it.

Saudi Arabia has been accused of not doing enough to prevent civilian deaths in its war against the Houthi rebel group in Yemen.

Since Saudi's military intervention in March 2015, more than 10,000 people have been killed.

The Ashura, or "Day of Remembrance," marks the death of Muhammad's grandson Hussein in the 680 Battle of Karbala. The event caused a schism in Islam that has intensified in recent times due to geopolitical factors. (01.10.2017)