A suspected airstrike by the Saudi-led coalition fighting Shiite Houthi rebels in Yemen killed at least 26 people at the market in Saada province. The coalition has denied intentionally targeting civilians in the past. 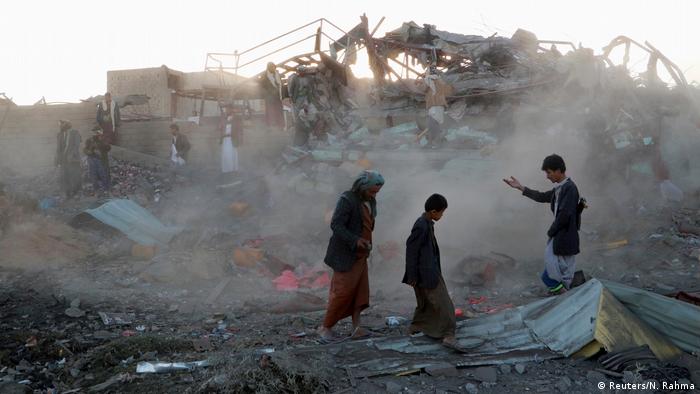 At least 26 people, including children, were killed in Yemen's northern Saada province when a suspected air strike by the military coalition led by Saudi Arabia hit a hotel and a neighboring market.

Dozens of others were injured in the attack that demolished a budget hotel and reduced market stalls nearby to heaps of metal.

Saada province, which borders Saudi Arabia, is a stronghold of the Iran-backed Houthi rebels, who have seized large parts of Yemen, including the capital Sanaa.

There was no immediate reaction from the coalition.

The Saudi-led Arab military coalition, which has been fighting against the Shiite rebels to reinstate Yemen's internationally-recognized government, has in the past denied intentionally targeting civilians.

But human rights groups have accused the coalition of bombing civilian gatherings, markets, hospitals and residential areas across the war-torn country.

Last month, the United Nations added the coalition to its annual list of shame for killing hundreds of children in Yemen last year. The world body said 683 children were killed or injured in Saudi-led attacks that struck dozens of schools and hospitals in 2016.

Saudi Arabia rejected the report, saying it was "inaccurate and misleading."

The coalition intervened in Yemen in 2015 to support President Abd-Rabu Mansour Hadi's government after Houthi rebels forced him into exile.

More than 10,000 people have been killed in more than two years of civil war that has ruined the economy and pushed millions to the brink of famine.

Thirty months of war, high prices of consumer goods, and unemployment have had dramatic consequences for the population. A cholera outbreak peaked in June with thousands being admitted to clinics run by aid organization MSF. It reported on Monday "the cholera outbreak is not over but it is no longer our medical priority in Yemen."

Hunger levels are surging globally, with crises escalating in Yemen and South Sudan. As we mark World Food Day, DW learns how failing to tackle suffering today will leave a dangerous legacy for tomorrow. (16.10.2017)

A report from the United Nations has found more than 5,000 people have died in Yemen in the past two-and-a-half years. The UN's human rights office is calling for an investigation of human rights violations. (05.09.2017)