A report from the United Nations has found more than 5,000 people have died in Yemen in the past two-and-a-half years. The UN's human rights office is calling for an investigation of human rights violations. The report, released by the United Nations human rights office on Tuesday, also found that more than 20 percent of the 5,144 people that died between March 2015 and August 30, 2017 were children. An additional 8,749 people have been injured.

Yemen is in the midst of a civil war between its Saudi-backed Sunni government and an alliance of Iranian-backed Houthi rebels and other fighters loyal to Yemen's previous president, Ali Abdullah Saleh.

The conflict has lead to famine, widespread internal displacement and a cholera epidemic that, according to the World Health Organization (WHO), has exceeded 600,000 cases.

"Two years of wanton violence and bloodshed, thousands of deaths and millions of people desperate for their basic rights to food, water, heath and security – enough is enough," said UN High Commissioner for Human Rights Zeid Ra'ad Al Hussein as part of a statement from the UNHRC.

Zeid has repeatedly pushed for an international investigation into human rights violations in Yemen. 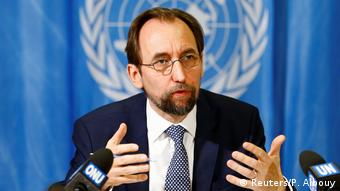 "An international investigation would go a long way in putting on notice the parties to the conflict that the international community is watching and determined to hold to account perpetrators of violations and abuses," Zeid said.

"The reticence of the international community in demanding justice for the victims of the conflict in Yemen is shameful, and in many ways contributing to the continuing horror."

Yemen's National Commission, which reports to Saudi-backed President Abed Rabbo Mansour Hadi, has said its own investigation is sufficient. The human rights office cast doubts over the credibility of that investigation, noting that it is "not perceived to be impartial."

A cholera epidemic has killed more than 2,000 people in Yemen, data from the WHO and Yemen's Health Ministry showed on Tuesday.

Though the number of new suspected cases has slowed to 3,000 per day, the number of infected people is more than double what the WHO had originally expected – they projected 300,000 cases after six months – reflecting the rapid spread of the outbreak.

The WHO has said Yemen's deteriorating hygiene and sanitation conditions caused the outbreak. Cholera is a disease that spreads quickly through contaminated food and water.

World in Progress: Cholera in Yemen

"Yemen's health workers are operating in impossible conditions," WHO chief Tedros Adhanom Ghebreyesus said in August. "Thousands of people are sick, but there are not enough hospitals, not enough medicines, not enough clean water."

Larissa Alles, who belongs to international charity Oxfam, told DW in August that one can find people lying in hospital parking lots waiting for care and many have to choose between buying something to eat or buying transport to the nearest clinic.

"The situation is terrible. It's getting worse every day and is deteriorating quickly. We are shocked at how massive this cholera outbreak is and, above all, how quickly it's spreading," Alles told DW.

Brazil: Police raid on a favela in Rio leaves over 20 dead