The World Health Organization reports that Yemen's cholera outbreak has infected more than 500,000 people since April. Nearly 2,000 people have died. 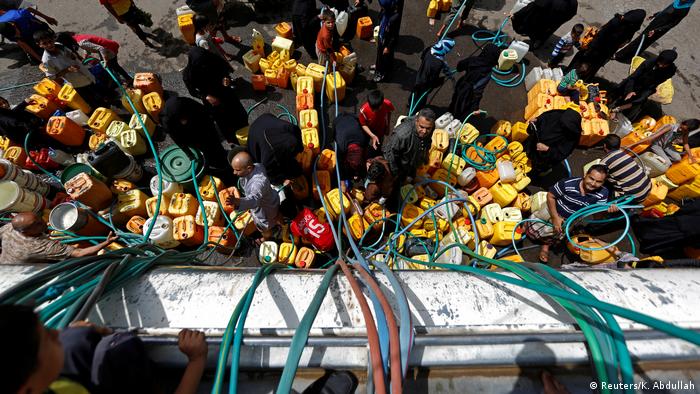 The UN health agency reports that Yemen's cholera epidemic has gotten worse. According to a report released by the World Health Organization (WHO) on Monday, 503,484 people have become infected and 1,975 have died in the months since the outbreak began in April.

"Yemen's health workers are operating in impossible conditions," WHO chief Tedros Adhanom Ghebreyesus said in a statement. "Thousands of people are sick, but there are not enough hospitals, not enough medicines, not enough clean water," he added.

The collapse of Yemen's infrastructure during two years of war between the Saudi-backed ethnically Sunni government and the Shiite rebels who control the capital, Sanaa, has created the conditions for the epidemic to become the world's largest, with as many as 5,000 infections contracted per day. In his statement, Ghebreyesus said Yemen's lack of a functioning state meant that many of the doctors and nurses needed to rein in the outbreak had not received salaries for nearly a year. "They must be paid their wages so that they can continue to save lives," he said.

On Monday, WHO warned that cholera had spread rapidly because of Yemen's deteriorating hygiene and sanitation conditions, with millions of people cut off from clean water across the country. Cholera spreads quickly through contaminated food and water. WHO and its partners have continued "working around the clock" to support the national efforts to halt the outbreak.

Though children, the elderly and people with suppressed immune function are especially vulnerable, WHO reports that over 99 percent of people who contract cholera in Yemen could survive with health services. However, more than 15 million people in the country have no access to basic care.

The WHO's Ghebreyesus called on all sides in Yemen's conflict, which has directly led to the deaths of more than 8,300 people since March 2015, to urgently seek a political solution. "The people of Yemen cannot bear it much longer," he said in his statement. "They need peace to rebuild their lives and their country."

WHO has also reported that about 60 percent of Yemen's population of 27 million people have been left vulnerable to undernourishment by the war.