If the US puts intermediate-range missiles in Europe, Russia will take countermeasures, Putin said at his end-of-year press conference. He warned the "threshold" for the use of nuclear weapons was getting lower. 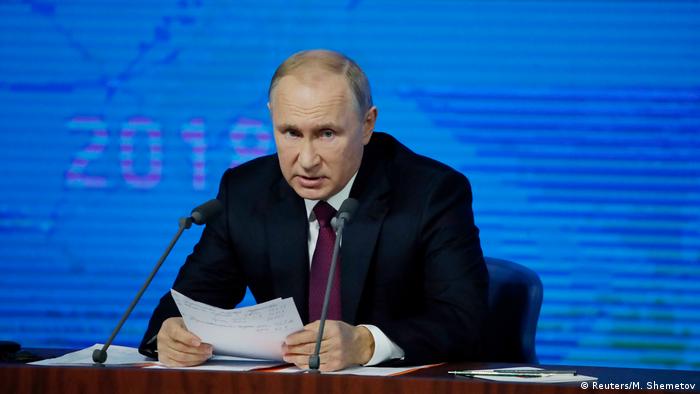 An attempt to lower the threshold for the use of nuclear weapons could potentially result in an all-out nuclear war, Russian President Vladimir Putin warned during his traditional end-of-year press conference on Thursday. It is the first such event since the beginning of Putin's new presidential term in May and the 14th for him in total.

"There is a tendency to lower the threshold for the use of nuclear weapons," he said. "In the West, there is this idea of using low-yield nuclear weapons. The use of such weapons could lead to a global disaster," the Russian leader stressed.

Putin pointed at the US intention to withdraw from the 1987 Intermediate-Range Nuclear Forces (INF) Treaty. He said that if the US puts intermediate-range missiles in Europe, Russia will be forced to take countermeasures.

The Russian leader also warned against developing tactical nuclear warheads and conventional long-range ballistic missiles. According to him, both are dangerous, because they increase the threat of an incidental nuclear war.

"We are currently observing the collapse of the international system for containing weapons," he added.

Fate of Ukrainian sailors to be decided after trial

When asked about the clash in the Kerch Strait, where Russian warships captured three Ukrainian naval vessels, Putin confirmed that the possibility of exchanging the captured Ukrainians for Russian citizens had been discussed with Viktor Medvedchuk, who represents Ukraine in the Trilateral Contact Group on Donbass.

"He is constantly engaged in this question and recently came to Moscow, where he raised the question of the release of the Ukrainian soldiers detained in the Kerch Strait," Putin said.

"These issues can be solved only after the trial is over," the Russian leader stressed.

'We need to get into a new economic league'

While the problem of international tensions and an ongoing standoff with Ukraine loomed large at the event, economic aspects dominated the opening exchanges.

"The main thing is that we need to get into a new economic league. We could very well take the fifth place in terms of size of economy. And I think we'll do that," Putin claimed.

Russia is ranked 12th in the 2017 world pecking order by the International Monetary Fund, with economic output worth some $1.5 trillion (€1.3 trillion).

According to Vladimir Putin, Russia's economy grew 1.7 percent over the first 10 months of the year; the full-year growth was estimated at 1.8 percent.

Asked how a breakthrough was possible when annual GDP growth was not expected to exceed 2 percent, Putin partially blamed external factors for the troubles.

In recent years, the Russian economy has been suffering from low oil prices and Western sanctions.

This year's press conference was attended by a record number of accredited journalists, according to the presidential administration. Some 1,702 reporters signed up, compared with 1,640 last year.

NATO and the United States have increased their pressure on Russia over its alleged violation of the INF treaty. What is known about the Russian missile at the center of the allegations? (05.12.2018)