Russian hydropower company RusHydro has launched a wind power plant in Russia’s Arctic region. It's far from a signal that fossil-fuel-hungry Russia is going green, but it's a start. 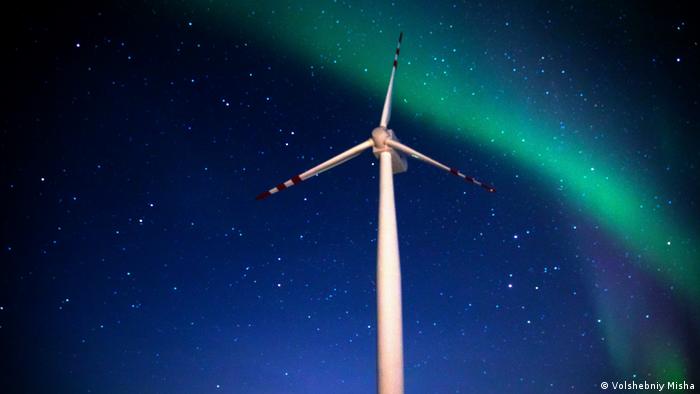 Russian company RusHydro has launched a 900-kilowatt (KW) wind power plant in the Arctic settlement of Tiksi in the Yakutia region in Russia's Far East. Some see the move as heralding either a crack in or at least a minor recalibration of the Kremlin's fossil-fuel-heavy long-term energy strategy. Others see it as a lot of hot — well, cold — air. So, where does the truth lie?

But that is still a drop in the ocean. Only 17% of Russia's electricity is generated from renewables and about 90% of that is from hydropower, a legacy of the Soviet emphasis on huge infrastructure projects. Roughly 68% of Russia's electricity is generated from thermal power and 16% from nuclear power. Anatoly Chubais, the head of Russia's Association of Renewable Power Development, says that by 2024 the generation of solar and wind energy in Russia is expected to reach 1%, low in comparison with 17% in the UK or 25% in Germany.

Executives at oil and gas majors like Gazprom, which provide a major chunk of the Putin regime's budget revenues and political support, are unlikely to start wearing sandals or going vegan any time soon of course. But the recent moves do at least put some green leaves on the plate, and not all of them of the fig variety. 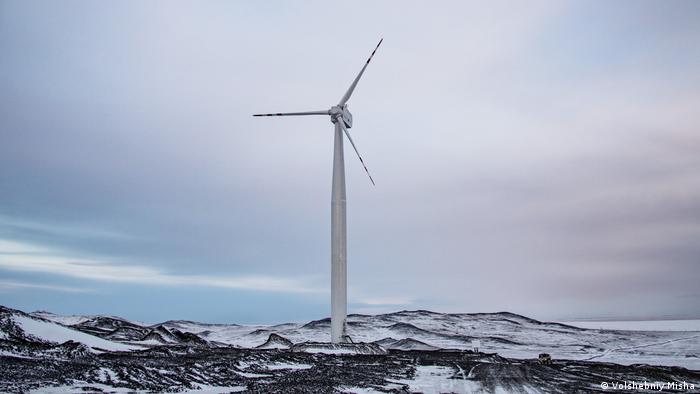 The Tiksi project is designed to become a part of an integrated energy complex that includes a diesel power plant with total capacity of 3.9 MW, a spokesman for the company told DW. The plant already supplies energy to 4,600 people living in the isolated polar village. Three unique wind turbines manufactured by Japanese firm Komaihaltec are engineered to operate in temperatures of minus 50 degrees Celsius.

Russia is the sixth-largest producer of renewable energy in the world, but is 56th when hydroelectric energy is excluded.

While most of the large hydropower plants in Russia date from the Soviet era, the abundance of fossil fuels in the Soviet Union has resulted in little perceived need for other renewable energy sources. Hydroelectric power provides 51.5 GW of the country's 53.5 GW of clean energy generation capacity.

Renewable energy takes up only a 3.6% share of Russia's overall energy mix.

The government plans to have 4.5% of all generation from renewable sources by 2024, which would require additional an 25 GW of renewable generation capacity.

According to the International Renewable Energy Agency (IRENA) 2017 report, Russia has the potential to increase the projected share of renewables from 4.9% to 11.3% of total final energy consumption by 2030. This would require, it said, $15 billion (€13.4 billion) a year in investment between 2010 and 2030.

A problem encountered by foreign developers has been the high level of local content required to qualify for the highest tariff rates, an essential part of many Russian RES projects' long-term feasibility. The percentage of Russian-made equipment required to avoid tariff penalties were modest at first, but has risen to 65% for wind farms and small hydro, and 70% for solar.

But not all potential market participants are being put off, some suggest.

"It is noteworthy that the Russian energy sector is actively participating in the development of renewable energy and Russian energy companies are among the most active joint venture partners to foreign investors in such projects," Thomas Heidemann, a partner at CMS in Düsseldorf, told DW.

Others are less sanguine. "There are not many places in the world with fewer incentives to develop renewable energy, Indra Overland, head of the Center for Energy Research at the Norwegian Institute of International Relations (NUPI), told DW.

Russia has a highly continental climate, with lots of sunshine, more than most of Western Europe, he says. So what's the problem?

"Russia does not have a strong commitment to renewable energy compared to most countries," Overland says. "This is because climate change is low on the agenda in Russia and the country is also rich in both fossil fuels and nuclear power.

"I do not see the contours of a genuine greening of the Kremlin. Rather, it pays half-hearted attention to the issue on and off."

Some believe this is a consequence of the "oil curse" — the paradox facing countries with fossil fuel resources and an unstable economy or democracy. Others note another curse, namely dependence on nuclear power.

Overland believes, however, the most important geopolitical consequences of the renewable energy transition will depend not on whether Russia adopts renewables but on whether the rest of the world does. "If so, Russia may lose the export markets for its oil and gas and its main source of revenue," he says.

A world upside down

"I find it hard to believe that the Kremlin is greening,'" Jeffrey Mankoff, senior fellow for Russia & Eurasia at the Center for Strategic and International Studies in Washington, told DW.

"To the extent Russia cares about clean energy — in the Arctic or elsewhere — there is always a political or strategic rationale.

Mankoff suggests the Kremlin is interested in boosting its gas production in the Arctic to keep up overall production and potentially increase its market share. Arctic development is also a basis for increased cooperation between Russia and China, he says. "This is financing the Yamal liquified natural gas plant and could potentially get into other projects as Western sanctions squeeze out other investors," he says.