The director of an Arctic power plant faces five years in jail after a major oil spill. Some 20,000 tons of diesel have flowed out of a collapsed storage structure, polluting waterways in Russia's north. 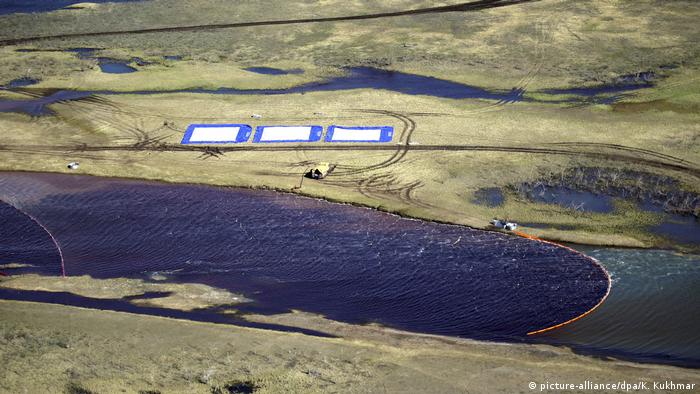 Russian investigators have charged the director of an Arctic power plant after a major oil spill, authorities announced on Monday.

More than 20,000 tons of diesel has leaked into the ecologically fragile area in the Norilsk region since a storage tank collapsed on May 29, prompting fears for the environment and wildlife.

The oil has contaminated local waterways and is threatening to reach the Arctic Ocean.

Emergency workers have deployed booms to block the fuel from spreading further into the Ambarnaya River, a tributary of Lake Pyasino. That lake feeds a river that flows into the Kara Sea arm of the Arctic.

The head of Russia's natural resources agency Rosprirodnadzor, Svetlana Radionova, denied that any fuel has reached the lake, but local inspectors say the tests being performed aren't adequate, and that fuel has likely poured into the body of water.

"If a storm comes, (the fuel) will settle down on the banks and will slowly poison the ecosystem of Norilsk and Pyasino. The consequences won't be immediate. It might also reach the Kara Sea,'' regional inspector Vasily Ryabinin told The Associated Press.

"I had said several times that we have to examine Lake Pyasino and then determine the location for tests."

Specialists from the region's Ministry of Ecology announced on Monday that they had detected high fuel concentrations beyond the floating barriers in the Ambarnaya River.

A team of 17 investigators are determining if further charges can be brought.

The fuel spill was declared a federal emergency on June 3. On Monday, the Ministry for Development of the Far East and the Arctic announced it was planning to roll out a monitoring system for changes in permafrost in the region.

Some 20,000 tons of diesel has spilled into the Ambarnaya River in Siberia. Russian President Vladimir Putin has expressed his fury over the handling of the incident. (03.06.2020)