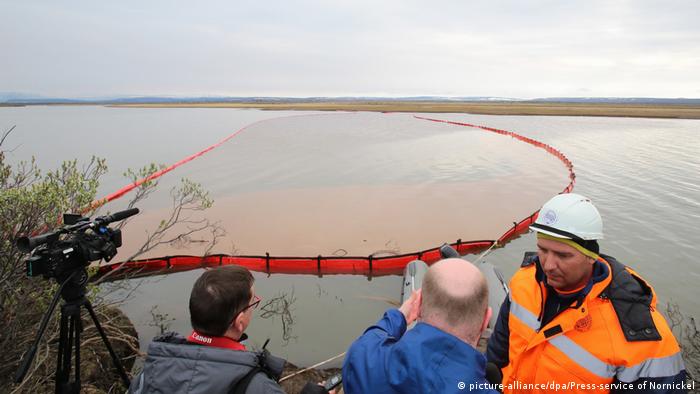 Russian President Vladimir Putin declared a state of emergency in a region of Siberia on Wednesday after roughly 20,000 tons of diesel spilled from a power plant, fouling waterways in the process.

The incident occurred on Friday on the outskirts of the city of Norilsk, almost 3,000 kilometers (1,860 miles) northeast of Moscow. Physical barriers were laid out as a result of the discharge into the Ambarnaya River, which feeds into a lake. From there, the water continues into another river that ultimately heads into the Arctic Ocean.

Putin took a stern view on proceedings as he criticized a subsidiary, NTEK, of metals giant Norilsk Nickel (Nornickel), after officials said the firm did not report the incident.

"Why did government agencies only find out about this two days after the fact? Are we going to learn about emergency situations from social media? Are you quite healthy over there?" Putin lambasted NTEK chief Sergei Lipin.

Nornickel announced in a statement that NTEK made known what had occurred in a "timely and proper" way.

However, Krasnoyarsk region governor Alexander Uss told Putin he only "learned of the real situation" on Sunday after "alarming information appeared on social media."

Alexei Knizhnikov of the World Wildlife Fund's Russian branch said the effect on fish and other resources could result in more than 1 billion rubles ($14.6 million, €13 million) of damage.

The NTEK operated plant is one of a number of factories in the area that have made the industrial city of Norilsk one of the most heavily polluted places on earth.

The cause of the diesel spill has yet to be determined, but a company statement said it was concerned about facilities constructed on sinking soil above permafrost, ground that remains completely frozen for at least two years.

The environmental group Ecodefense is being targeted by the Russian authorities for refusing to comply with a law that was heavily criticized internationally. Now its director, Alexandra Korolyova, has fled to Germany. (22.07.2019)

Russia unveils plan to 'use the advantages' of climate change

Russia has published an action plan to mitigate risks associated with present and future climate change in the country. The report also outlines "positive" effects of changes in the climate. (06.01.2020)

Russia has been struggling to put out gigantic forest fires in Siberia that environmentalists have dubbed an ecological catastrophe. Observers warn of a disaster that could accelerate the melting of the Arctic. (31.07.2019)