By pretending that a prominent Kremlin critic had been killed in Kyiv, Ukrainian intelligence says it wanted to expose a genuine Russian plot to murder the investigative journalist. But many questions remain unanswered. 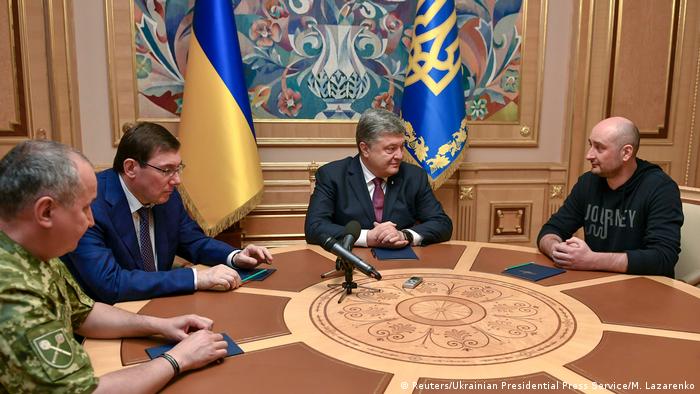 Many reactions poured in from abroad, too, when Kyiv reported at the end of May that the Russian opposition journalist Arkady Babchenko had been shot dead. One day later it was surprisingly revealed that the murder had been faked by the Ukrainian secret service SBU only to get to the people who had planned to actually carry out the murder. The authorities quickly spoke of a trail leading to Russia. Four months later, a key figure, a Kyiv businessman, was convicted of conspiring to commit murder. But the case remains opaque.

Babchenko, 41,  had made a name for himself as a war reporter and Kremlin critic, although some of his comments were received as tasteless in social networks. After a short stay in the EU, he lives in exile in Ukraine and works for a TV station.

Little has been revealed about the plot to murder him. Boris German, who ran a factory making blank-firing guns, was arrested as the organizer of the murder immediately after the public spectacle; the 50-year-old was previously unknown to the general public. German is said to have hired a friend of his, a former fighter against separatists in the East, to kill Babchenko for $30,000 (€26,000).

The assassin, for his part, informed the SBU secret service. According to media reports, German made a deal with the public prosecutor's office and was sentenced to a relatively mild sentence of 4.5 years in prison at the end of August. The sentence has been final since the beginning of October.

The trial took place in a closed hearing, and details are unknown — except that German named a certain Vyacheslav Pivovarnik as the client. In mid-September, Pivovarnik — a young Ukrainian now apparently living in Russia — published a video on YouTube in which he denied the accusations against him. He said he was an SBU employee himself and that the Babchenko case was a plot by the Ukrainian secret service.

In early October Babchenko published a long text on Facebook in which he explained why he suspects Russia. He claims his suspicion is supported by circumstantial evidence such as photos and private data, which can only be accessed by Russian authorities. Babchenko also mentions a concrete name as the suspected backer of his murder: the Russian businessman Yevgeny Prigozhin.

"With my notes (on Facebook) about Prigozhin, I had probably become a thorn in his side," Babchenko said in an interview with DW.

The 57-year-old Prigozhin, who is said to have connections in the Kremlin, is mentioned in Russian media as the operator of an internet troll factory in St. Petersburg and head of a kind of private army, among other things. The US has brought charges against him on suspicion of interference in the 2016 presidential election. Prigozhin, however, denies all allegations.

Babchenko said that the main goal of his planned assassination was probably to "destabilize the political situation in Ukraine."

His death would have further divided the country, caused unrest and possibly led to a change of power, Babchenko said. Other murders of prominent persons are also said to have been planned.

Babchenko appealed to the Ukrainian secret service SBU to publish details of the trial. "I believe the SBU should convene a press conference and present evidence, because there are questions," the journalist said.

He will soon try to change his previous status as a witness in order to gain access to the files as an injured party.