Arkady Babchenko′s faked death seen as a blow to independent journalism | Europe | News and current affairs from around the continent | DW | 31.05.2018

Journalists in Moscow and Kyiv criticized their colleague Arkady Babchenko for faking his death. They said the stunt has undermined trust in independent journalism and thrown his own credibility into question. 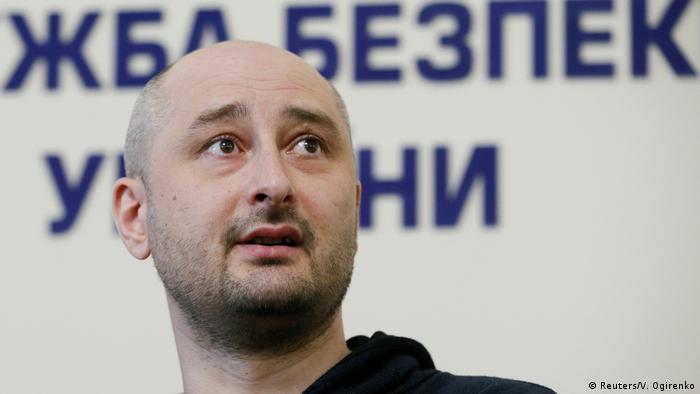 Journalists in Moscow and Kyiv were shocked twice over the last two days. On Tuesday it was reported that Arkady Babchenko, a Russian journalist and a staunch Kremlin critic, had been killed near his apartment in the Ukrainian capital. But then the following day he suddenly appeared safe and sound at a press conference organized by the Ukrainian security services.

Babchenko's colleagues in Russia and Ukraine took his "resurrection" with mixed feelings. Some of his colleagues in Moscow said that faking his death undermined the trust in independent journalism. Faking Babchenko's assassination was part of the operation by Ukrainian security services to seize the real killers.

"All of us who are journalists felt cheated," Irina Borogan, a Moscow-based investigative journalist, told cable broadcaster TV Rain. "All we know is it was faked and that no credibility will be given to Arkady Babchenko anymore."

Political journalist with Kommersant FM radio in Moscow Dmitry Drize pointed out on Thursday that in Russia critics of the Kremlin were "still shocked." People were in the process of expressing their condolences – including Babchenko's opponents – when the news came. "They were fooled, cheated," he said.

Read more - 'Killing' of Babchenko raises a lot of questions

'I will tell him that he is a moron'

Some of their colleagues in Kyiv echoed this sentiment, saying they felt fooled, too.  Andrei Palchevsky, who hosts a prime time talkshow on Ukrainian public broadcaster UA: First noted that those involved in the imitation of Babchenko's death had "made fools out of journalists." Calling the operation by the Ukrainian security services "the biggest blow to the government's authority," Palchevsky said the move had undermined the trust in Ukrainian authorities, while handing a win to the Kremlin.

However many of those who knew Babchenko personally cared less about the political side of the stunt, although they criticized the way the secret services had carried out the operation. 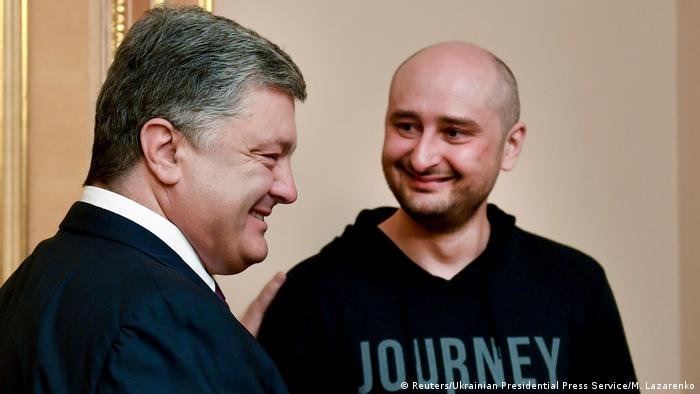 Ukrainian President Poroshenko met with Babchenko soon after the shocking news that he was, in fact, alive

"When I see him again, I'm going to tell him that he's a moron. Seriously!" Moscow photojournalist Pyotr Shelomovsky told DW right after the news of Babchenko's "resurrection" emerged. "Nobody does things this way, you should care for the people who love you. There should have been another way to carry this operation out."

Shelomovsky also said that Babchenko's friends had already collected money for his funeral.

Another Moscow journalist Roman Popkov said he buy into reports that Babchenko's wife had not been aware of the operation. He also added that he didn't feel any resentment, just relief. "The first thought I had was that the man had lived out an elusive dream. He has in fact been to his own funeral and will see his own obituaries. Can you imagine how lucky he is in this sense?" said Popkov, who had written one of the obituaries himself.

Read more - Arkady Babchenko: The man who came back from the dead

Business as usual for security services

Many of those who talked to DW after the revelation about the journalist's faked death noted that faking a murder is a standard trick used by security services. According to Oleg Eltsov, a crime reporter in Kyiv, it was necessary in order for the instigator of the crime to transfer the last tranche of money to the killer, which facilitated the arrest.

"I heard such stories in the 90s when this kind of attempted assassinations of crime bosses were carried out," Moscow opposition politician Dmitry Gudkov told DW. The news that Babchenko is alive had come a few hours before a memorial organized by Gudkov was supposed to start in the center of Moscow. "This all looks like a Hollywood story," Gudkov said. "My wife called me and said that Babchenko is alive. I thought she was trolling me."

Regime opponents have marched in several cities across Russia to mark two years since opposition leader Boris Nemtsov was killed in Moscow. Nemtsov's family says the masterminds behind the crime still need to be found. (26.02.2017)

Her father was Russian opposition politician Boris Nemtsov, who was assassinated in February 2015. Now Zhanna Nemtsova, who works for DW, launches a book in Germany, as she wants to "wake up Russia." (12.02.2016)