Regime opponents have marched in several cities across Russia to mark two years since opposition leader Boris Nemtsov was killed in Moscow. Nemtsov's family says the masterminds behind the crime still need to be found.

Zhanna Nemtsova, 32, of Deutsche Welle's Russian-language service, was presented the "International Woman of Courage Award" by Secretary of State John Kerry at a March 29 ceremony in Washington, D.C.. (31.03.2016)

Police boosted security for the central rally in Moscow on Sunday, where some 15,000 people attended the event, according to organizers and reporters at the scene. In turn, police estimated the crowd to be around 5,000 people.

Regime opponents set up the march to commemorate the death of charismatic opposition leader Boris Nemtsov, who was killed in February 2015 just outside the Kremlin.

"This is not a march of mourning," Ilya Yashin, a close friend and political ally of Nemtsov's told the protesters on Sunday. "We are not here to cry but to voice our demands, such as asking that political prisoners are released."

The protesters chanted slogans such as "Russia without Putin" and "Russia will be free." Some of the protesters held placards asking the Kremlin to "stop its oppression in Crimea."

Smaller rallies were held in several other cities, including St Petersburg, Novosibirsk and the former Nemtsov political stronghold of Nizhny Novgorod. 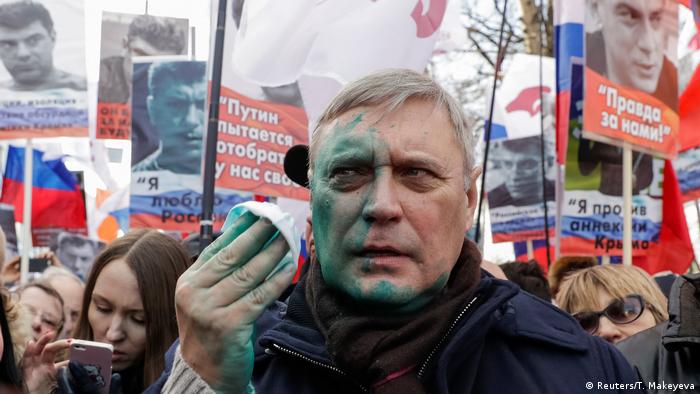 'The government is afraid'

In the run-up to the Moscow march, an unidentified man sprayed green disinfectant fluid at Nemtsov ally and one-time prime minister of Russia Mikhail Kasyanov. The fluid, known in Russia as 'zelenka,' is not harmful but leaves green stains on the clothes and skin. The police detained the suspect and Kasyanov went on to attend the march.

"This is the hysteria of the government. They do not know what to do. The government is afraid," former Russian MP Gennady Gudkov said of the attack on Kasyanov.

Killed by a Chechen

Nemtsov's murder sent shockwaves across Russia and the world. The Russian politician had built up his profile under President Boris Yeltsin, rising to the position of governor of Nizhny Novgorod and eventually serving in the Kremlin as deputy prime minister.

After Vladimir Putin took office in 2000, Nemtsov grew to be one of the most outspoken critics of the regime, publicly opposing, among other things, the annexation of Crimea. He was murdered on February 27, 2015, just a few days before he was set to participate in a big opposition demonstration.

According to investigators, he was gunned down by Zaur Dadayev, a former deputy commander of a paramilitary police battalion in Russia's autonomous Chechen Republic. The murder took place on Bolshoy Moskvoretsky Bridge, a stone's throw from the Kremlin.

Nemtsov supporters subsequently set up a memorial at the scene, which is maintained by volunteers. Thousands of people laid flowers at the spot after Sunday's march.

Russian authorities arrested five people from Chechnya and the suspects are currently on trial. However, Nemtsov's family and allies accuse the authorities of not probing the political background of the assassination. According to some, the murder was likely masterminded by someone close to Chechnya's Kremlin-loyal president and former warlord Ramzan Kadyrov.

"The investigation stopped at the level of those who carried out the murder, but nothing has been done to find those who ordered it," Vadim Prokhorov, the lawyer for Nemtsov family told the AFP news agency.

Nemtsov is the highest-level opposition figure to be assassinated since Vladimir Putin was elected.

India: Farmers clash with police on protest march to Delhi 4h ago