Russian meddling: US intelligence heads warn 'Our democracy itself is in the crosshairs'

The leaders of the US intelligence community have gathered at the White House to present a united front. Donald Trump has faced massive criticism for failing to act on Russian election interference. 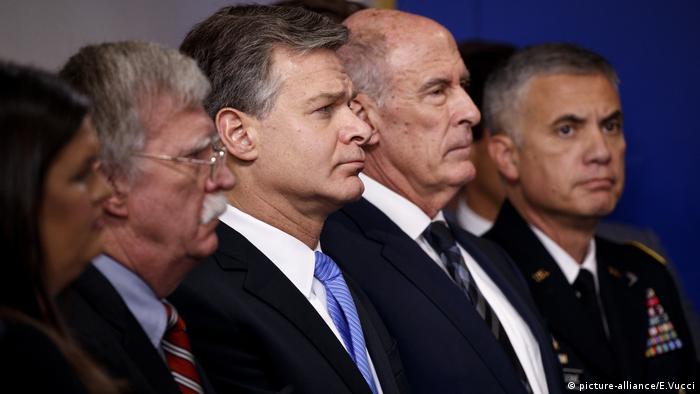 The United States government has warned that Russia is conducting "information warfare" ahead of US midterm elections, and officials say they have assembled a "vast, government-wide effort" to counteract interference.

US President Donald Trump has faced bipartisan criticism that the country remains exposed to election meddling as he fails to act on the issue.

The heads of national intelligence, Homeland Security, the National Security Agency and the FBI appeared alongside each other to assure the public they were acting against meddling.

Director of National Intelligence Dan Coats said: "We continue to see a pervasive messaging campaign by Russia to try to weaken and divide the United States."

FBI Director Christopher Wray said: "This is not just an election cycle threat. Our adversaries are trying to undermine our country on a persistent and regular basis, whether it's election season or not."

Homeland Security chief Kirstjen Nielsen said: "Our democracy itself is in the crosshairs."

Although scant on details, the collective warning runs counter to Trump's repeated downplaying of Russian interference in his election victory. The assembly of the leaders of the US intelligence community, all stressing Russian interference attempts, came soon after Trump was forced to retract statements that undermined their conclusions.

Presidents Donald Trump and Vladimir Putin held a private meeting for a little over two hours. Trump said he had "no reason to believe" that Russia had interfered with the 2016 presidential election. (16.07.2018)