Russian lawmakers have voted to ask President Vladimir Putin to recognize the self-declared Donetsk and Luhansk People's Republics in Ukraine as independent nations. 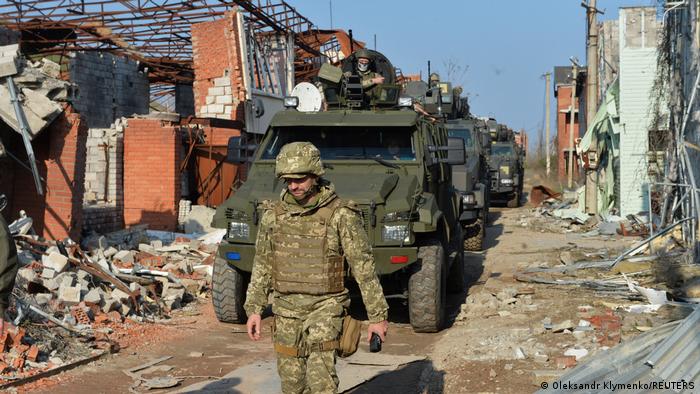 Ukrainian armed forces in Donbass have been fighting Russian-backed separatists

Recognizing of Donetsk and Luhansk would be a significant step that would effectively end the existing Minsk peace process for eastern Ukraine, which Russia has said is committed to until now. The 2015 deal foresees their reunification with Ukraine, but with Kyiv granting the two regions wide-reaching autonomy.

What did Russian lawmakers say?

The speaker of the Russian parliament's lower house, Vyacheslav Volodin, said that lawmakers would directly call on Putin to recognize the regions as "sovereign and independent states."

The Duma said in a statement that it considered the recognition of the regions to be "morally justified." It accused Ukraine of breaking the terms of the Minsk agreement, subjecting residents to shelling from weapons and imposing an economic blockade on the population.

"The state Duma expresses its unequivocal and consolidated support for the adequate measures taken for humanitarian purposes to support residents of certain areas of the Donetsk and Luhansk regions of Ukraine who have expressed a desire to speak and write in Russian, who want to respect freedom of religion, and who do not agree with the actions of the Ukrainian authorities that violate their rights and freedoms," the appeal stated.

German troops arrive in Lithuania as part of NATO effort

The two regions are in the part of Ukraine known as Donbass, where Russian-backed separatist forces have been fighting the Ukrainian army since 2014. Russia has issued passports to hundreds of thousands of Donbass residents.

Lawmakers had been asked to consider two alternative resolutions on recognition of the self-declared Donetsk and Luhansk People's Republics. One had been to first consult the Russian Foreign Office before forwarding the appeal to the president. However, another resolution, for the direct appeal, won more votes.

The Duma's appeal comes amid an intense diplomatic effort to prevent any Russian invasion of its pro-Western neighbor Ukraine.

Moscow has amassed around than 130,000 troops near to its border with Ukraine and is also conducting military drills in neighboring Belarus and on the Black Sea.

Ukrainian Foreign Minister Dmytro Kuleba warned that recognition of the rebel territories as independent would mean that "Russia de facto and de jure will withdraw from the Minsk agreements with all the attendant consequences."

"We have already warned our partners about this position," he said.

Speaking before the vote, Putin's spokesman Dmitry Peskov did not say if the Kremlin would support any such appeal.

"I cannot answer this question. You know that no official decisions have been made on this matter, there are no official discussions," Peskov said.

However, he added: "The people's representatives reflect the opinion of the people. We treat this with understanding."

"We will not invade Ukraine unless we are provoked to do that," Chizhov said. "If the Ukrainians launch an attack against Russia, you shouldn't be surprised if we counterattack. Or, if they start blatantly killing Russian citizens anywhere — Donbass or wherever."