Russian business interests are casualty of Libyan conflict | World| Breaking news and perspectives from around the globe | DW | 31.08.2011

The political upheaval in Libya could result in considerable losses for Russian companies, according to experts. Hardest hit will likely be the arms trade, the oil and gas sector and infrastructure projects. 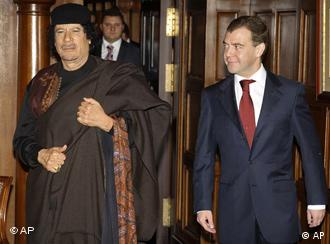 Gadhafi in Moscow in 2008 during discussions on an arms deal

Russian companies stand to lose almost 7 million euros ($10 million) due to the change of government in Libya, according to experts. Arms exports are especially vulnerable since it is likely that the new Libyan government will look to NATO countries for future weapons deals due to the alliance's help in toppling Moammar Gadhafi.

But the hard times won't be limited to the arms trade. Projects by RZhD, the government-owned Russian railway carrier as well as Russian oil and gas companies are also in danger.

"We've lost Libya completely," Aram Shegunts, the director general of the Russia-Libya Business Council, told the news agency RIA Novosti. "Our companies won't be given the green light to work there. If anyone thinks otherwise they are wrong." NATO countries could well get priority in future oil contracts

In 2008, RZhD signed a deal with the Gadhafi regime to build a rail line along the Mediterranean from Sirte to Benghazi. The contract foresaw the construction of 30 rail flyovers, 23 bridges, four large rail stations and 24 smaller stations and was estimated to be worth 2.2 billion euros.

When the anti-Gadhafi uprising began, construction work on the project, due to be completed in 2013, was already well underway. Russia had made substantial infrastructure investments, building a cement factory and welding facility. But since the beginning of the conflict all work has come to a halt. If the contract is cancelled, RZhD stands to lose around 104 million euros, according to Viktor Markov, a senior analyst with Zurich Capital Management.

The losses for the Russian energy sector could also be substantial as gas and oil companies are worried about being shown the door by the new Libyan administration.

Energy giants Gazprom and Tatneft are active in Libya and oil subsidiary Gazprom Neft has had big plans for the North African desert. The company has been cooperating with Germany's Wintershall on a big oil and gas exploration project. 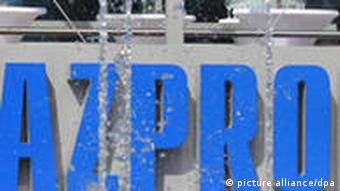 Gazprom stands to lose millions if existing contracts are torn up

But according to Zurich Capital Management, Gazprom would lose about 240 million euros if the current contracts are not honored by the new government.

Despite the doom-and-gloom scenarios, the Libyan upheaval could have some positive effects on Russia's economy, according to analyst Grigory Brig of Investcafe. Given the unrest in the Middle East and North Africa, the situation in Russia looks quite stable, which could whet Europe's appetite for Russian oil and gas deposits, he said.

Already, Gazprom has increased its gas deliveries to Italy by over 50 percent.

"There's no doubt that gas deliveries this year from Gazprom to Europe will increase by around 7 percent," Brig told Deutsche Welle.

Elephant still in the room?

Just before the conflict broke out, an agreement was sealed between Italian energy concern Eni and Gazprom Neft. Gazprom acquired 33 percent of Eni's shares in Libya's Elephant oil and gas production field project worth 113 million euros. 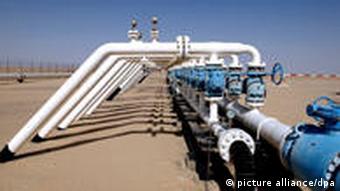 Germany's Wintershall has partnered with Gazprom on oil exploration projects

The deal was signed in Rome in February, but has never gone into effect since the breakout of hostilities prevented the companies from securing the required approvals from the Libyan side. It's still uncertain what the future of the Elephant project will be.

"I think that at the end of the day, the project won't be nationalized," said Vyacheslav Kulagin, deputy director of the Center for International Energy Markets Studies.

"But it's still unclear how the shares will be divided up since western companies have now expressed interest in the oil project," he told Deutsche Welle.

Libya's victorious rebels have already announced that western countries, particularly NATO nations, will have priority when it comes to new oil contracts because of the alliance's support during the revolution. That new friends list includes Europe and the Americans, but Russia has likely been left off.

Talks between OPEC members in Vienna have collapsed after a bid to increase global oil output was rejected. The failure to boost production has disappointed western countries who sought to stem fuel inflation. (08.06.2011)