The Libyan rebels are demanding that the international community hand over the frozen assets of toppled dictator Moammar Gadhafi. But many nations remain unconvinced that the rebels can responsibly handle the money. 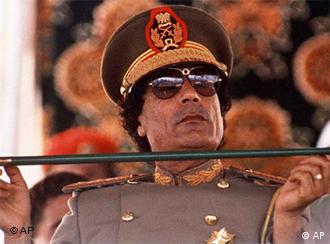 How many billions of dollars long-time Libyan leader Moammar Gadhafi has deposited abroad will probably never be fully known. According to estimates, Gadhafi has hidden $80 - $150 billion (55 billion -103 billion euros) around the world.

At least a portion of his fortune has been secured by the US, which blocked some of the dictator's bank accounts. The EU has also frozen some of his money. But Gadhafi is presumed to have also tucked away many of his assets in Switzerland and several African states.

The Libyan National Transitional Council (NTC) has demanded that this money be returned to them. Experts and politicians, however, remain divided over whether or not it is a sensible idea to hand the money over to the rebels at this point.

"Financial resources are one of the least important aspects of Libya's reconstruction right now," Markus Kaim, head of the international security division at the German Institute for International and Security Affairs, told Deutsche Welle.

Given that Libya is already wealthy due its oil and gas deposits, the most important priority at this point should be re-establishing stability and developing political institutions, according to Kaim. 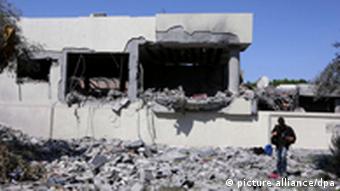 The NTC now has to rebuild war-torn Libya

But Tunisian-born Hamadi El-Aouni, professor of politics and economics at the Free University of Berlin, argues that the money should be given to the rebels as quickly as possible in order to help alleviate the plight of the suffering civilian population.

"Libya is suffering a lot due to the lack of medical equipment, medicine and qualified personnel," El-Aouni told Deutsche Welle.

Up this point, the United Nations has turned over $1.5 billion of Gadhafi's assets frozen by the United States. Italy has also announced that it plans to hand over 350 million euros to the rebels as soon as possible.

According to Kaim, Italy and other national governments are trying to get on the rebels' good side with a view toward lucrative business prospects in Libya's oil industry.

"Many oil and gas contracts are being renegotiated now," Kaim said. "Many governments have legitimate reasons to hope that their oil-producing firms will benefit ."

While some states are pressing ahead, the EU is having a difficult time releasing frozen Gadhafi assets to the rebels. This is primarily because Libya lacks the state institutions that can properly handle the money, according to Joachim Hörster, a Mideast expert and member of the German parliament's foreign affairs committee.

As a consequence, the EU needs to investigate whether or not it can turn the money over to the rebels in good conscience, said Hörster, a member of the conservative Christian Democrats. 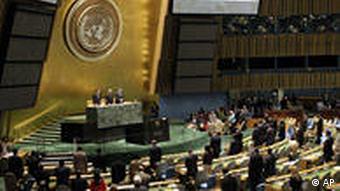 But El-Aouni believes that the money legally belongs to the NTC since the council has been recognized worldwide - with the exception of a few African states - as the sole and legitimate representative of the Libyan people. A UN committee could monitor the money, but in principle the funds belong to the Libyan people and should not be treated like Western aid, El-Aouni said.

Monitoring the money's distribution is no easy task and "would challenge any government," according to Hörster.

"Even if the NATO allies manage to speak a common language regarding Libya's reconstruction and take care to proceed according to an agreed upon process, you still could not guarantee that the money would end up in the right place in every case," Hörster said.

It is also unclear whether or not the transitional council would agree to let foreign, primarily Western powers decide under what conditions the money could be released.

"The Libyans would rightfully point out that they carried out their revolution by themselves and probably would not want to submit to a Western dictate," Kaim said.

With so many uncertainties, many governments - including Berlin - would prefer to wait for a clear UN resolution before turning over the money to the rebels. According to Hörster, waiting for such a resolution is the correct policy, because only then will it be clear that the money can be handed over to the new Libyan government in accordance with international law.

Libyan rebels say they are poised to move into the city of Sirte pending talks with tribal chieftains. The town is the birthplace of ousted leader Moammer Gadhafi, who remains at large. (28.08.2011)