Russia sees 'chance to reset US relations' after Mueller probe

The Kremlin has rejected claims found in Robert Mueller's probe that it interfered in US elections. But that hasn't stopped some officials from urging the US to turn a new page in relations between Moscow and Washington. 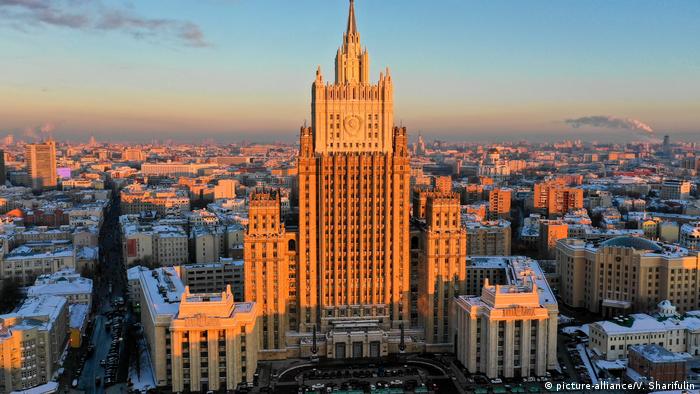 Russia's Foreign Ministry on Monday said the findings of US special counsel Robert Mueller's investigation should prompt White House officials to exonerate Moscow of attempting to influence the 2016 presidential elections.

"We hope that Washington will in the course of time pluck up its courage and officially confess that not only was there no 'conspiracy' but that all insinuations about Russia's interference into the US presidential elections are a groundless vicious defamation created to be used in the internal political struggle in the US," the ministry said in a statement.

While a summary of Mueller's findings produced by Attorney General William Barr said that there was "no collusion" between US President Donald Trump's campaign and Russia, it still accused Moscow of interfering in the 2016 presidential election.

For Konstantin Kosachev, who chairs the foreign affairs committee in the upper chamber of the Russian parliament, the "no-collusion" finding presented a unique "chance to reset relations" between Washington and Moscow.

"We are clearly ready," Kosachev said. "And I would propose that we begin with the most urgent issues: the INF Treaty and START." Both treaties have been a source of contention for US-Russian relations. They had limited the use and accumulation of strategic arms.

But not all Russian officials were thrilled by the conclusions. Dmitry Peskov, spokesman for Russian President Vladimir Putin, said the Kremlin still considers allegations of Russian interference in US elections as "baseless."

Peskov, however, noted that it is difficult to comment further on the probe since "we have only seen some of the takeaways, some of the summary, which doesn't say anything new except that there was no conspiracy."

Although Mueller's probe did not uncover a conspiracy between Trump's campaign and Russia, its content was only shared via a 4-page summary produced by Attorney General Barr. For many US lawmakers, that wasn't enough.

Democrats have called for Mueller's entire report to be made public. "It will be vital for the country and the Congress to evaluate the full body of evidence collected by the special counsel, including all information gathered of a counterintelligence nature," said a joint statement from top Democrat lawmakers in the House of Representatives, including Adam Schiff, who chairs the House Intelligence Committee.

The White House hailed the findings as a victory, with Trump saying it represented "total exoneration." However, Mueller's probe said there was not sufficient evidence to exonerate Trump of obstruction of justice allegations.