Russia: Feminist activist could face prison for vagina drawings | Europe | News and current affairs from around the continent | DW | 07.07.2020 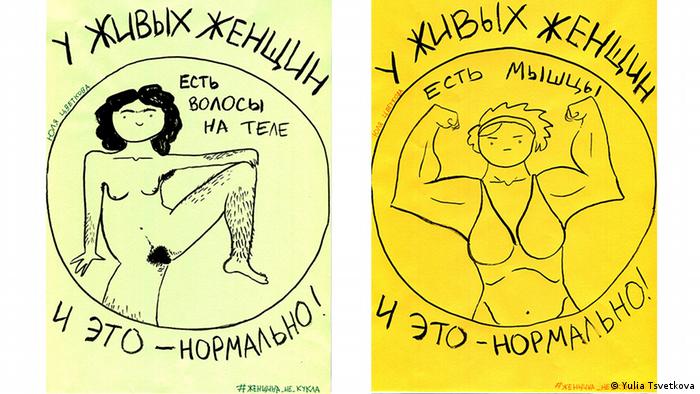 "My body is not pornography" — that is the slogan written under many of the social media posts inspired by Yulia Tsvetkova. Women are posting pictures of themselves showing off their curves, body hair and scars, along with feminist art and pictures of everyday objects that look like vaginas — like fruits or flowers.

The posts are in support of the 27-year-old artist and activist, who could face a jail term of between two and six years for distributing pornography online. The charges relate to a group called "Vagina Monologues," which Tsvetkova ran on the social network VK. The activist used the group to post other people's colorful and delicate drawings of vaginas. The group's description explains that the goal was to celebrate the female body and protest taboos surrounding it. Police also called her in for questioning about her own drawings, a series cartoons of women with captions like "Real women have hair on their bodies — and that's normal" or "Real women have muscles — and that's normal."

Until recently, Tsvetkova ran a youth theater group in the remote city of Komsomolsk-on-Amur in Russia's far east. She vocally promoted LGBTQ+ rights and feminism in her activism, hosting lectures for the LGBT community and giving classes on sex education, which is prohibited in Russian schools. Tsvetkova is currently under strict travel restrictions as she awaits her trial on the pornography charge. She will also go on trial for administrative charges of spreading "homosexual propaganda," which is punishable under a controversial 2013 law in Russia.

Rights groups like Amnesty International and the Russian NGO Memorial have declared Tsvetkova a political prisoner and a petition calling for charges against her to be dropped has garnered nearly 250,000 signatures. At the end of June, dozens of media outlets publicly supported her and around 40 protesters were arrested in Moscow during a demonstration against Tsvetkova's case.

Speaking to DW, Tanya Lokshina, associate director for Human Rights Watch's Europe and Central Asia division called the case "absurd" and "outrageous." She says Tsvetkova is being targeted because she is "something of a local dissident" in a "small and far-off city." "What is happening is a witch-hunt against someone who stands out and thinks differently. And that is unacceptable under Russian and international law," Lokshina added. 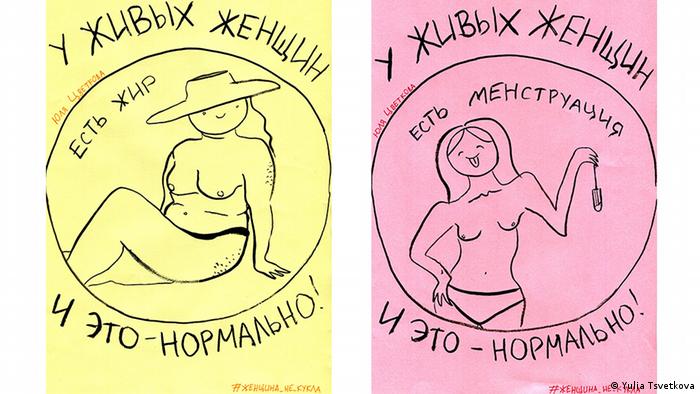 Tsvetkova herself  believes the police specifically chose the law on spreading pornography because it sounds "shameful"  — in an attempt to keep public support to a minimum. And she thinks the "vagueness" of the pornography law is a good pretext for the local authorities to crack down on her activism.

She says her problems started after two plays she put on with her theater group in Komsomolsk-on-Amur in early 2019: one was about gender stereotypes, the other about militarism with an anti-war message.

"Our authorities don't like either topic and I think it was the combination of the two [that got me in trouble]," she told DW over the phone. She said the fines and accusations of "gay propaganda" are something she has come to expect as an LGBT activist in Russia, but the pornography accusation came as a surprise. "I know what pornography looks like and this isn't it!" she says of the body-positive drawings. 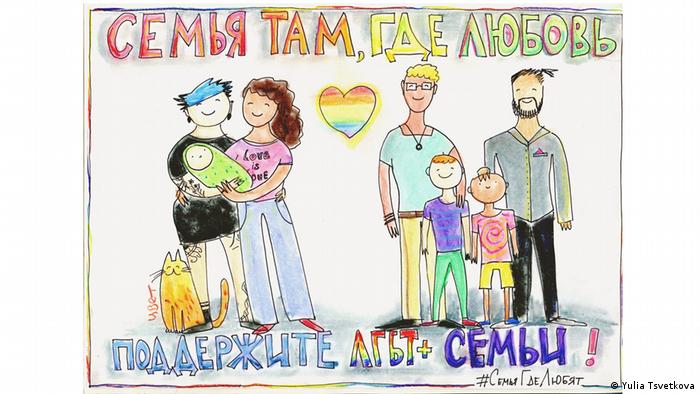 "A family is where there is love. Support LGBT+ families!" the caption to this drawing by Yulia Tsvetkova reads

In Russia, the authorities actively promote traditional "family values." For example, the constitutional amendments that were recently passed in a public vote contained an article stating that marriage is between a man and a woman. A survey by the state pollster VTsIOM showed it was one of the most popular changes in the package of amendments.

Asked in early July about a rainbow flag at the US embassy building in Moscow, Russian President Vladimir Putin joked that the flag shows something about "who works there," but then emphasized that in Russia there never has been and never will be anything to "restrict people's rights according to their race, their sexual orientation, their nationality, or their religion."

Meanwhile, a recent survey by the independent pollster Levada Center, showed that 50% of people think gays and lesbians should either be "liquidated" or kept isolated from society, with the number at 27% for feminists. Interestingly, Russia has long been progressive when it comes to gender equality. The Soviet Union guaranteed equal legal rights to women in 1917 and was the first country to legalize abortion. But even today the concept of "feminism" is often seen as something Western and alien to Russia. 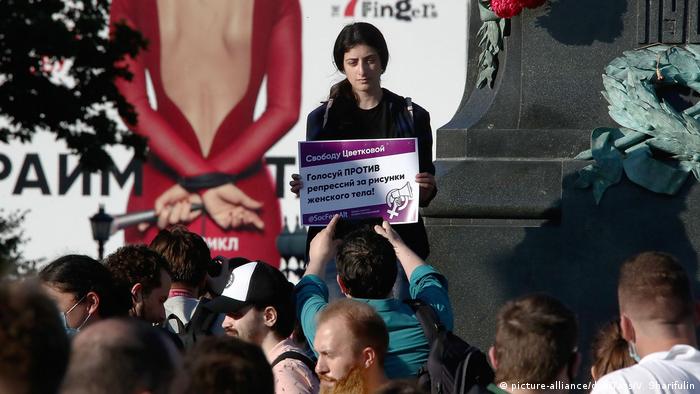 There has been a wave of public support for Yulia Tsvetkova, including during this protest against the vote on constitutional amendments

Though Tsvetkova's case is playing out in her home town, the campaign to support the activist has made waves on the national level as well. Recently, Russia's High Commissioner for Human Rights, Tatyana Moskalkova, announced that as a result of the large "public response," she had taken the case on personally and would be sending a member of her team to Tsvetkova's court proceedings to monitor them.

Tvsetkova says the national and international support has been "incredible" and is a psychological lifeline for her. "It helps me not to feel alone. Anonymity is the scariest thing — and I know that because I was alone at the beginning. It meant that if I was at the police station, I knew that they could do whatever they want and no one would ever find out," she says.

She adds that the huge public discussion around her case has shown her that her activism has hit a nerve in Russia, showing how much the country needs an open discussion on gender equality and the LGBTQ community. "I want to keep working as an activist," she says when asked about her plans for the future. "And the fact that I have been prosecuted means my desire to change things and talk about injustices has only grown."

But she is less optimistic about the court proceedings themselves. As Tsvetkova knows, the majority of people who face court proceedings in Russia are found guilty. "It's hard for me to hope for anything. But I try to believe that there can be some sort of miracle."

Users on Instagram have come out in support of Tsvetkova