On July 1 Russia will "consult" voters on an array of possible amendments to the constitution. Prejudices against LGBTQ+ communities are being exploited to get people to vote in the referendum, DW's Juri Rescheto writes. 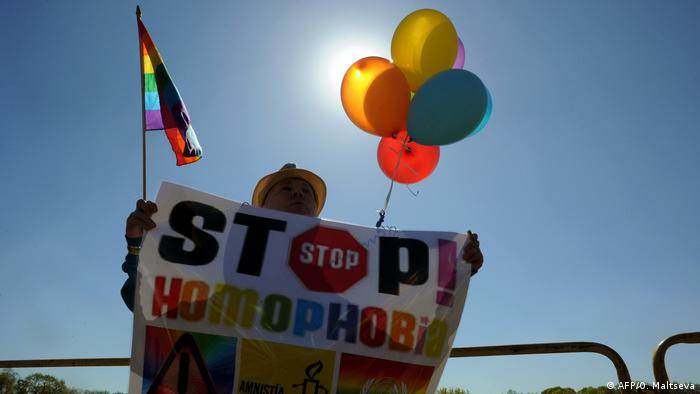 A homophobic video is currently stirring controversy in Russia. The plot is simple: Petya, an orphan, is waiting happily for his new mother in a children's home. But, instead of a woman, there is a heavily made-up, effete-looking man waiting outside for the child. Petya is sad. "Will you decide for a Russia like this?" a narrator asks. "Decide over the future of the country and vote for the constitutional amendments." Produced by the Federal News Agency and the Patriot media group, this homophobic propaganda suggests that, if voters don't approve changes to the constitution, same-sex couples will soon be able to adopt children in Russia.

On July 1, Russians will decide on constitutional changes that could permit Vladimir Putin to run for president again when his term ends in 2024. There is also an amendment that would set into law that opposite-sex marriages are the only basis for healthy Russian families — in contrast to other European countries where same-sex partners can now marry and largely enjoy legal equality.

Homophobia is being used to push for a backward-looking country that is hostile to the European Union. This is nothing new: Since 2013, a law has banned "homosexual propaganda" in Russia — imposing penalties on people who talk positively about gay men and lesbians in the presence of minors, for example. In 2017, the European Court of Human Rights ruled that the law constituted state promotion of homophobia.

But, even in contemporary Russia, there are people who think differently. Under the hashtag #DaVyberu ("Yes, I'll vote for this"), social media users are posting drawings and cartoons that show a happy Petya with two fathers and calling for a different future in Russia.

But this is scant comfort for LGBTQ+ people in Russia, who remain without protection.

Colombia set to swear in Gustavo Petro as president 7h ago