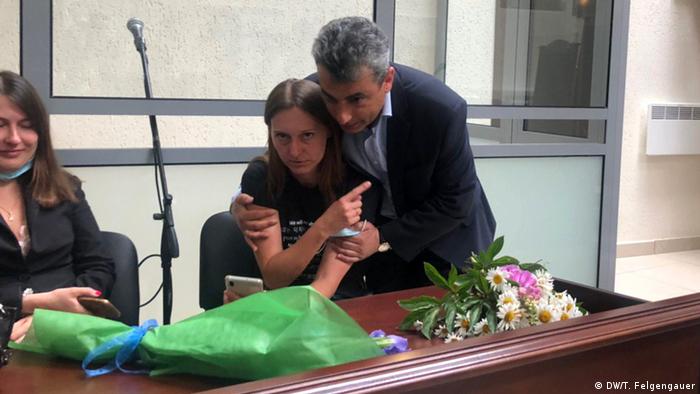 Prokopyeva had reported a story about a young man who detonated a bomb inside a government building and faced up to seven years in prison on terrorism-related charges.

The Radio Free Europe/Radio Liberty (RFE/RL) journalist used a radio program in 2018 to discuss the case of a 17-year-old who blew himself up at the office of the Federal Security Service, the successor to the KGB, in the Russian city of Arkhangelsk.

She denied the charge and said she had been put on trial for doing her job.

The court fined Prokopyeva 500,000 roubles (€6,160, $6,952). The journalist's supporters who were present in the courtroom shouted "shame" and "she is not guility" as the judge read out the verdict.

Prokopyeva, who arrived at the court wearing a T-shirt bearing the slogan "We will not shut up", said she would appeal the decision.

Prosecutors had asked the judge to jail Prokopyeva for six years and ban her from working in journalism for four years on the charges that carry a maximum sentence of seven years.

Dozens of human rights defenders signed a statement published by the Memorial rights group denouncing the case as "openly political" with the goal of "intimidating Russian journalists".

"A journalist is entitled to freely spread information not only on events but also on ideas," the statement read.

Ahead of the sentencing, international press advocacy group Reporters Without Borders urged the Russian authorities to throw out the case saying it set a "dangerous precedent."

The rights group last month described the case as a "violation of freedom of expression" that sent a "chilling message".

Last week, Prokopyeva's employer said she had done the opposite of what prosecutors had alleged.

"Svetlana's commentary was an effort to explain a tragedy," RFE/RL acting president Daisy Sindelar said in a statement.

"The portrayal of her words as 'promoting terrorism' is a deliberate and politically motivated distortion aimed at silencing her critical voice, and recalls the worst show trials of one of Russia's darkest periods."

Intimidation, violence, arrests: Around the world, journalists face harassment or persecution for their coverage of the COVID-19 crisis. DW honors their work by presenting them with this year's Freedom of Speech Award. (03.05.2020)

After Twitter removed thousands of accounts it claims were used to push propaganda in China, Turkey, and Russia, Ankara accused it of a "smear" campaign, and China said it was "the biggest victim" of disinformation. (12.06.2020)