Hillary Clinton has laid bare who she holds responsible for her electoral defeat against President Donald Trump. "I was on the way to winning" until WikiLeaks and the FBI undermined her campaign, she said. 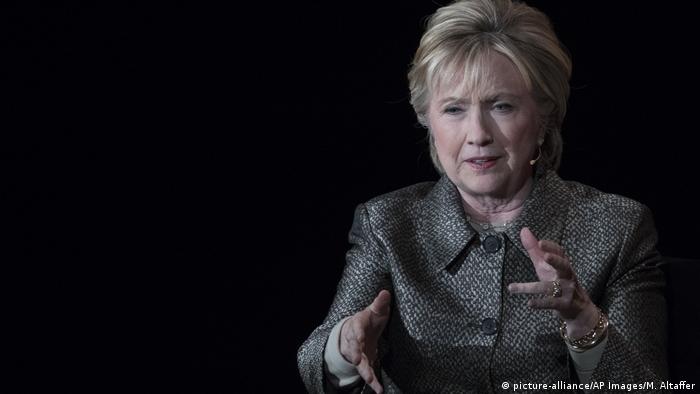 Former Secretary of State Hillary Clinton has blamed part of her electoral defeat last November on misogyny, Russian interference and FBI director James Comey in her most extensive remarks since the divisive 2016 presidential election.

Speaking at an annual luncheon for the Women for Women International charity in New York on Tuesday, Clinton said she took "absolute personal responsibility" for a series of campaign mistakes that contributed to her loss.

Despite garnering 2.8 million votes more than her rival, she lost the US presidential election to Donald Trump, who won more votes in the Electoral College.

Less than two weeks before the election, Comey sent a letter to US lawmakers saying the FBI was reopening a probe into a personal email server used by Clinton during her tenure as the US top diplomat from 2009 to 2013.

However, two days before the election on November 8, he presented another letter saying the bureau had not changed its conclusions offered in July, in which Comey announced there was no basis for prosecution.

"I was on the way to winning until a combination of Jim Comey's letter on October 28 and Russian WikiLeaks raised doubts in the minds of people who were inclined to vote for me, but got scared off," Clinton said.

On Russia's interference in the election, federal agencies including the CIA and National Security Agency concluded that Moscow-backed entities had hacked Democratic Party institutions in a bid to boost Trump's chances at victory. US intelligence also claimed that Russia's President Vladimir Putin had "ordered" their targeted involvement in the election.

Emails obtained during various cyberattacks on Democratic Party targets were eventually published by whistleblowing group WikiLeaks, which US authorities have branded as a "hostile intelligence service."

"I was the candidate, I was the person who was on the ballot. I am very aware of the challenges, the problems, the shortfalls that we had," Clinton said. "The reasons why I believe we lost were the intervening events in the last 10 days."

Clinton's 2016 presidential election campaign marked her second go at the White House, after failing to win the Democratic Party's endorsement against former President Barack Obama in 2008.