The presidential hopeful has called for the FBI's director to "put it all out on the table." But her rival used the latest development in the email scandal to shore up support, saying she committed "illegal actions." 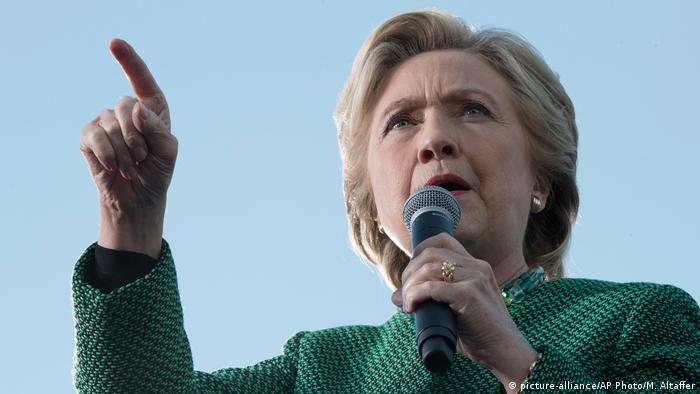 The announcement of a new FBI probe into additional Clinton emails 11 days before election day brings up more questions than answers. For the sake of voters, the FBI should get to the bottom of this before November 8.

The hacking into the Democratic Party’s server has sparked a debate about the security of the US voting system. But experts are less worried about hackers breaking into election systems than about a political issue. (14.10.2016)

A special US election edition of DW's WorldLink looks at how the 2016 campaign has polarized Americans. Meet the country's losers of globalization and get lost in the election media madness. (26.10.2016)

US Democratic presidential candidate Hillary Clinton on Saturday lashed out at the head of the Federal Bureau of Investigation (FBI), describing his actions the day before as "deeply troubling."

FBI Director James Comey on Friday sent a letter to lawmakers, stating that the bureau "learned of the existence of emails that appear to be pertinent to the investigation" into Clinton's use of a private server during her tenure as state secretary.

"I agreed that the FBI should take appropriate investigative steps designed to allow investigators to review these emails to determine whether they contain classified information, as well as to assess their importance to our investigation," Comey added in the letter.

However, the senior law enforcement official did not provide details about the emails and whether they were previously reviewed in an ongoing probe of Clinton's private servers.

The Justice Department reportedly advised the FBI against telling Congress about the developments in the Clinton case, a government official told The Associated Press on Saturday.

Officials in the Justice Department concluded that Comey's letter could be inconsistent with a department policy which directs against actions which could be viewed as affecting the election or helping a candidate, the official said.

"It is pretty strange to put something like that out with such little information right before an election," Clinton told supporters at a rally in the swing state of Florida.

"It's not just strange, it's unprecedented and it's deeply troubling because voters deserve to get full and complete facts," she added.

The Democratic presidential hopeful has called on Comey to "put it all out on the table" by clarifying information concerning the newfound emails, and confirming whether they are duplicates already reviewed by the federal law enforcement body.

On Sunday, US Secretary of State John Kerry said that neither he nor his department had been contacted by the FBI over the latest investigation into Clinton's emails.

"By the way, obviously as an American citizen - not to mention as a former nominee of the party - there's a lot I'd love to say about what has been going on. But I can't and I'm just going to remain out of this," Kerry said during a visit to Ireland.

The US newspaper "The New York Times" (NYT) reported that the emails had not been sent or received by Clinton, citing officials close to the investigation.

Trump: 'This is bigger than Watergate'

The emails had been discovered during a separate investigation of former Congressman Anthony Weiner, the estranged husband of top Clinton aide Huma Abedin, sources told the NYT.

Meanwhile, Republican presidential hopeful Donald Trump lauded the latest development in Clinton's email probe, arguing that it proved she could not be trusted with the presidency.

"Her criminal action was willful, deliberate, intentional and purposeful," said Trump. "Hillary set up an illegal server for the obvious purpose of shielding her illegal actions from public disclosure and exposure."

Despite Trump's assertion, the FBI did not recommend criminal prosecution in July, when Comey announced the results of the bureau's investigation.

However, the real estate tycoon on Friday called Clinton's use of a private server as state secretary "the biggest scandal since Watergate."