The Kremlin has claimed that rebels are planning a chemical weapons attack with the intent of blaming it on Syria. Russia also says a British contractor is helping the militants. 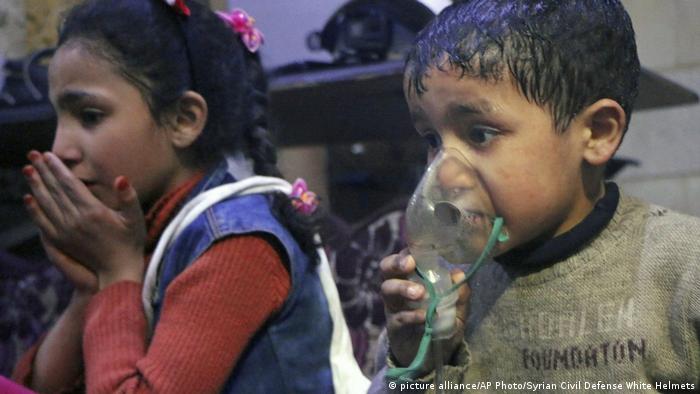 Russia's Defense Ministry said Saturday that Syrian rebels are planning a chemical weapons attack, with the aim of blaming it on the Syrian government to provoke a military response from the West.

Ministry spokesman Igor Konashenkov said in a statement that the jihadist group is "preparing another provocation of the 'use of chemical weapons' by Syrian government forces against the peaceful population of the Idlib province."

Russia's military sources claim several chlorine-filled containers had been delivered first to the town of Jisr al-Shughur and then to a nearby village. The ministry also claimed that a private British contractor is helping the rebels stage the attack, according to news agency AFP.

"The militants have the task of simulating the rescue of the victims of the chemical weapons attack dressed in the clothes of the famous 'White Helmets'," it said.

Konashenkov accused British special services of being "actively involved" in the "provocation" which will "serve as another reason for the US, the UK and France to hit Syrian government targets with air strikes."

US warning against chemical weapons

The Kremlin's claim comes several days after US National Security Adviser John Bolton warned the Syrian government against using chemical weapons, and promised that Washington will respond "very strongly" if they do.

The US, France and Britain launched a series of coordinated missile strikes on Syrian targets in April after it accused Syrian President Bashar Assad of allegedly ordering a chemical weapons attack on the town of Douma that killed scores of people.

Russia defended its Syrian ally and insisted the Douma attack was staged by the volunteer rescue service known as the White Helmets, which receives substantial funding from the UK Foreign Office and other Western governments.

Bolton's warning came Wednesday during a stop in Jerusalem. Washington, he said, was, "concerned about the possibility that Assad may use chemical weapons again."

"Just so there's no confusion here," Bolton continued, "if the Syrian regime uses chemical weapons we will respond very strongly and they really ought to think about this a long time."

There is growing speculation in the West of an impending Russian-backed government attack on Idlib, one of the so-called "de-escalation" zones that grew out of negotiations between Russia, Turkey and Iran last year.

Turkey's Foreign Minister Mevlut Cavusoglu visited Moscow Friday, and before his meeting with President Vladimir Putin he warned that a military solution in Idlib would be a "disaster."