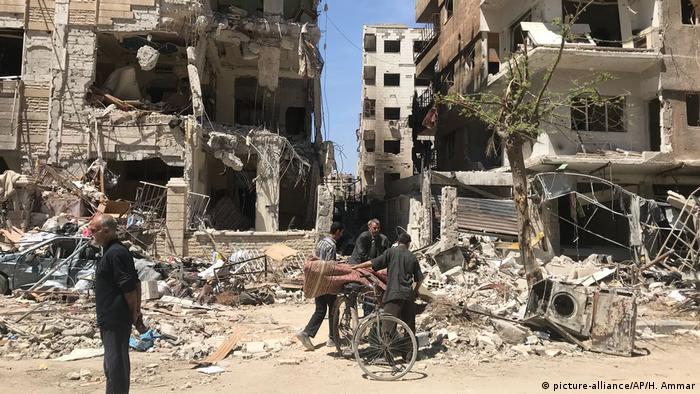 The Organization for the Prohibition of Chemical Weapons (OPCW) said the fact-finding mission team had collected samples for analysis from the site of the alleged April 7 attack, which resulted in retaliatory missile strikes by the United States, Britain and France.

Earlier on Saturday, Russia's Foreign Ministry said the OPCW team was on its way to Douma. It had been delayed for several days as it tried to reach the site. France and the United States accused Russia of obstructing access.

"The security of the OPCW has been guaranteed not only by the Syrian side but also by the Russian command in Syria," Russia's Foreign Ministry said.

"The samples collected will be transported to the OPCW Laboratory in Rijswijk and then dispatched for analysis to the OPCW's designated labs," the organization said.

Based on the analysis of the sample results and other information and materials, the team will compile a report to be submitted to the States Parties to the Chemical Weapons Convention for their consideration.

"The OPCW will evaluate the situation and consider future steps including another possible visit to Douma," the OPCW said.

Also on Saturday in Syria, anti-regime fighters and civilians were bused out of a northeast Damascus suburb, after rebel forces agreed to cede the territory to Assad's forces, which are backed by Russia and Iran.

Syrian state television reported 3,200 militants and their families were to be transported to Idlib and Jarabulus, a rebel-held area along the Turkish border.

Earlier this week, rebels agreed to surrender the town of Dumayr, an enclave northeast of Damascus. About 5,000 people, including 1,500 fighters, left the town.

France has proof that Syria used chemical weapons, "at least chlorine," said President Emmanuel Macron. Britain has stressed the need for an international response to the attack. (12.04.2018)

Russia condemns US airstrikes on Syria as world reacts

The ally of Syrian President Bashar al-Assad has slammed the US for its joint airstrikes in Syria, as has Iran. Though the UN called on participants in the regional conflict to show restraint, others welcomed the strike. (14.04.2018)

Visiting Russian politicians shared Syrian President al-Assad's view that the recent airstrikes had been an act of aggression. Chemical weapons investigators are set to begin probing the alleged gas attacks in Douma. (15.04.2018)