Visiting Russian politicians shared Syrian President al-Assad's view that the recent airstrikes had been an act of aggression. Chemical weapons investigators are set to begin probing the alleged gas attacks in Douma. 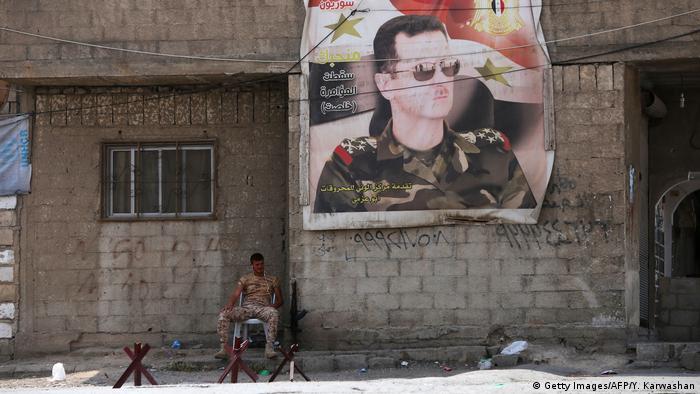 Russian politicians met with Syrian President Bashar al-Assad on Sunday, one day after joint airstrikes by the US, UK and France targeted centers related to suspected chemical weapons use by the Syrian government. Russia, an ally of al-Assad, condemned the strikes.

Al-Assad praised the Soviet era-air defense system that Syria had reportedly used to shoot down around 70 of the 100 missiles fired during the strikes, Russian news agencies said. He also described the airstrikes as an act of Western aggression, a view which the visiting lawmakers shared.

"From the point of view of the president, this was aggression and we share this position," Russian lawmaker Sergei Zheleznyak said after his meeting with al-Assad, according to Russia's TASS news agency.

Read more: Will Syria's Assad get the message? Ask Russia and Iran, say former US officials

The visiting Russians described al-Assad as in a "good mood." The Syrian president also reportedly accepted an invitation to visit Siberia, though it was not clear when the visit would take place.

On Saturday, a draft resolution brought by Russia before the UN Security Council condemning the air attacks failed to pass.

OPCW work in Douma gets underway

The politicians' visit came as the Agence France-Presse news agency reported that inspectors from the Organization for the Prohibition of Chemical Weapons (OPCW) were set to start their fact-finding mission on whether the chemical weapons of chlorine and sarin gas had been used against civilians in an April 7 attack in the town of Douma.

The investigators had arrived Saturday, just shortly after the airstrikes had taken place. Russia and fellow pro-Syrian government ally Iran slammed the US-led airstrikes for taking place before the OPCW could conduct their probe.

Meanwhile, the airstrikes on Syria have roiled internal politics in one of the striking nations, the United Kingdom. 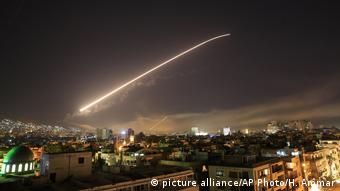 "I say to the foreign secretary, I say to the prime minister, where is the legal basis for this?" Corbyn said. "The legal basis ... would have to be self defense or the authority of the UN Security Council. The humanitarian intervention is a legally debatable concept at the present time," he said in a TV interview with the BBC. He also called for a "war powers act" that would force the UK government to seek parliamentary approval for future military action.

There is currently no legal requirement for the British government to seek parliamentary approval before committing troops to action.

Foreign Secretary Boris Johnson defended the government's decision to join the US and France in the airstrikes in Syria, arguing that lawmakers' approval was not sought due to the speed and the efficiency of the operation. 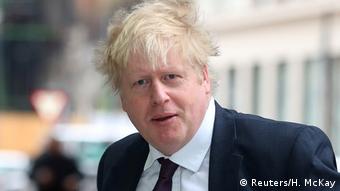 "Obviously our prime consideration has to be the safety of our serving men and women and of course the effectiveness and speed of the operation. And there is plenty of precedent for getting it done in this way," Johnson said in an interview with CNN, according to Reuters.

In a separate interview with the BBC, the foreign secretary said Britain and her allies "would study what the options were" should there be another chemical attack by al-Assad.

Also on Sunday, Pope Francis used his weekly address in St. Peter's Square to express his deep concern over the failure of world leaders to come up with a plan to end the violence in Syria.

"I appeal again to all the political leaders, so that justice and peace prevail," he told listeners gathered at the Vatican.

Yemen's Houthi rebels fired missiles at Saudi Arabia's capital in an apparent attempt to target the defense ministry. The recent increase in Houthi attacks could escalate tensions between Saudi Arabia and Iran. (11.04.2018)

The Iraqi prime minister has challenged US Secretary of State Rex Tillerson over his comments on Iranian militias in Iraq. Tillerson had called on the militias to "go home" as the fight against IS was ending. (24.10.2017)

Four of the six participants, Saudi Arabia, the UAE, Bahrain and Oman did not send their heads of state. At the same time, the UAE and Saudi Arabia announced a new bilateral agreement. (05.12.2017)

Without any real challenge, President el-Sissi has won by an overwhelming margin. His main challengers were either jailed, or complained that they had been either sabotaged or intimidated into not running. (02.04.2018)

Expert interview: What Russia did in Syria may predict what happens next in Ukraine 15.04.2022

There are some striking parallels between Russian military tactics in Syria and now in Ukraine, says Hanna Notte, an expert at the Vienna Center for Disarmament and Non‑Proliferation. Examining them further is useful.

Syria has been stripped of its voting rights at the Organization for the Prohibition of Chemical Weapons (OPCW), after the UN body repeatedly found it to have used chemical weapons in its civil war.