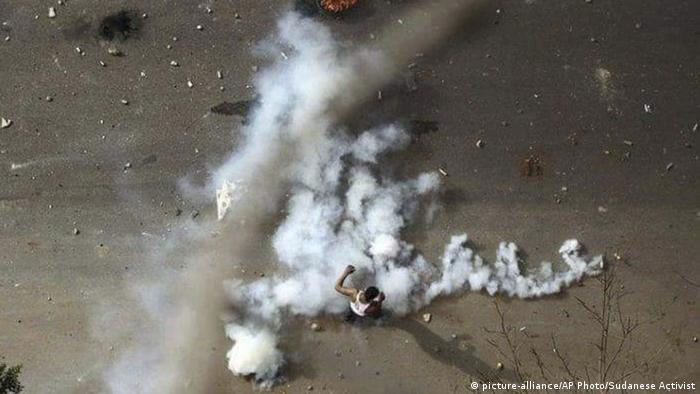 Police in Sudan on Monday used tear gas to disperse thousands of protesters shortly after they began to march toward the Nile-side palace of President Omar al-Bashir.

Crowds called for al-Bashir to resign following deadly anti-government demonstrations. Hundreds had chanted "freedom, peace and justice" and "revolution is the people's choice" ahead of the planned march.

Human Rights Watch has urged Sudan's government to order security forces not to use lethal force against demonstrators. It says 40 people have been killed during protests against rising prices, food shortages and a cash crisis.

Read more: Sudanese Foreign Minister: 'There is no torture'

Hundreds of police officers and security forces were deployed to prevent the rally from taking place on the eve of the country's Independence Day anniversary.

At least 19 people, including two military personnel, have been killed in clashes between protesters and police since the demonstrations over rising prices, shortages of basic commodities and a cash crisis began on December 19, according to government figures released last week. Amnesty International and other groups said the death toll is about twice as large.

Despite Bashir instructing police to abstain from using excessive force, there were unconfirmed reports on Monday of protesters being shot by live ammunition. Some security officers were reported on rooftops, and armored vehicles with machine guns were stationed along the main streets.

Human Rights Watch said Sudanese forces have been using tear gas and live ammunition against protesters, as well as beating and arresting many.

Last week, the United States, Britain, Norway and Canada said in a joint statement that they have "reliable reports" that Sudan's security forces were using live fire.

The protesters are calling for the resignation of President Omar al-Bashir following days of deadly demonstrations against rising prices and food shortages. Clashes erupted as police used tear gas to disperse the crowds. (25.12.2018)