Sudanese Foreign Minister: 'There is no torture'

The government of Sudan has often been accused of violating human rights and just as often, it has denied these charges. DW's Conflict Zone put Sudanese Foreign Minister Ibrahim Ghandour in the hot seat.

Ten years ago, the Sudanese government faced widespread criticism for violating human rights in Dafur. Washington referred to the atrocities as genocide and the International Criminal Court (ICC) issued arrest warrants for the sitting head of state, President Omar al-Bashir, for acts of genocide, crimes against humanity, and war crimes.

Now a decade later, armed conflicts between government security forces and armed opposition groups continue and Sudan is still being criticized for committing human rights violations on a systematic level by attacking, killing and raping civilians, looting and destroying their property and forcing hundreds of thousands to flee their homes, according to Human Rights Watch.

And it's not just Human Rights Watch that is alarmed over the human rights situation in Sudan.

In its 2017/2018 report on Sudan, Amnesty International talks of "widespread violations of international humanitarian and human rights law" in the African country, saying security forces in Sudan are targeting "opposition party members, human rights defenders, students and political activists for arbitrary arrest, detention and other abuses." 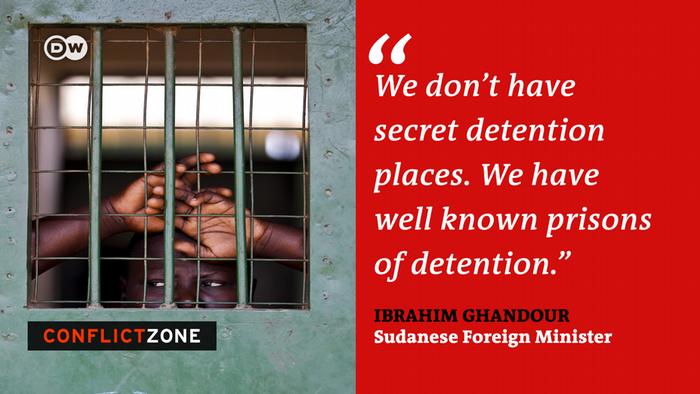 The African Commission on Human and Peoples Rights, which consists of 11 members which are elected by the African Union assembly, also expressed serious concern about "the constant harassment of human right defenders by the Sudanese National Intelligence and Security services (NISS); the arbitrary arrest and detention in secret places," saying it is a tactic Sudanese authorities use to obstruct the work of human rights activists.

And the UN Human Rights Council, an inter-governmental body within the United Nations made up of 47 States, has a similar assessment. In its 2017 report on the human rights situation in Sudan, the Council wrote that it is "particularly concerned by incidents of harassment, arrests, torture and prolonged detention of civil society actors."

'There is no torture'

"Sometimes you depart from normal. We're living in a world of turmoil around us. (…) You may take some measures even if you don't support those measures if they happen in a different environment."

He went on to deny that torture is happening in Sudan.

"I can tell you that there is no torture. These are preventing measures sometimes taken in order to ensure social security." 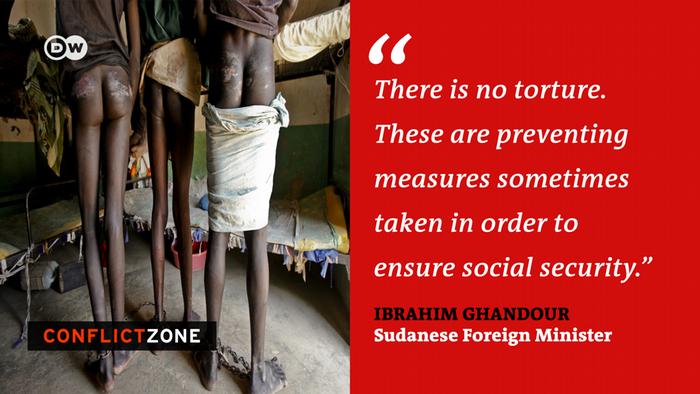 And he said that Sudan does not have secret detention places, as suggested by reports.

"We don't have secret detention places. We have got well known prisons of detention," Ghandour said.

For him, Sudan is in fact "one of the best examples of human rights in the region," as he stated on Conflict Zone.

'NGOs need to prove that they are doing their job properly'

The UN report accusing Sudan of stark human rights violations was written by Aristide Nononsi, an independent expert from Benin. Ghandour accused him of exaggerating the situation.

"Sometimes envoys exaggerate things for reasons that I am not going to talk about. (…) [Nononsi] reflects the story of the political opposition. Political opposition in our part of the world would like to undermine governments and this is an ordinary behavior."

Ghandour then said that while he respects NGOs, "sometimes they depart from normality and they need to prove that they are doing their job properly."

The African Union reported violations of political and civil rights leading up to the vote, saying the level of freedom enjoyed by parties and candidates was generally unsatisfactory. 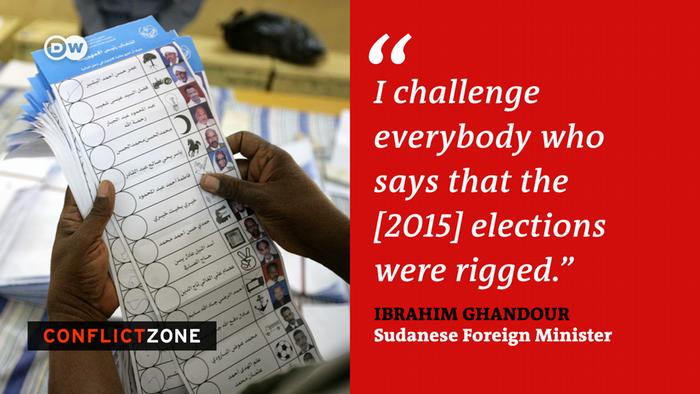 "I was in charge of those elections and I challenge everybody who says that the elections were rigged," Ghandour said on Conflict Zone.

The African Union also received reports of arrests and detention of independent journalists who criticized the government during the election. The union consisting of 55 countries on the African continent noted a restrictive political environment and a media landscape in Sudan that is characterized by censorship and harassment of independent media houses.

"I can tell you nothing of that has happened. (…) Throughout the elections none of the journalists were arrested and I'm sure of that. I was in charge of the same elections." 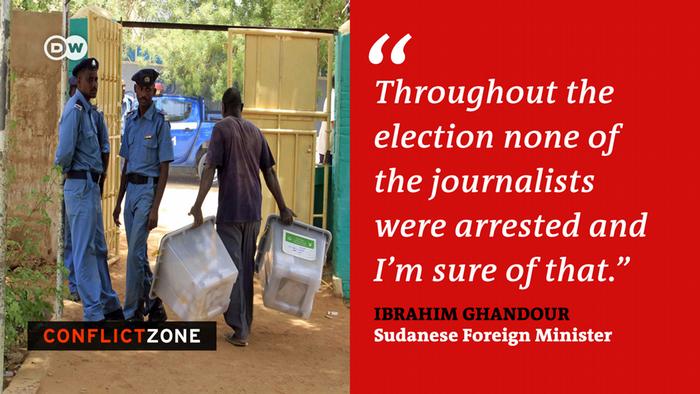 Sudan's interim national constitution specifically upholds the right to freedom of expression and the media. But is the press really free in Sudan?

In December 2014, President Omar al-Bashir spoke at a party meeting and criticized what he called the government's inability to control the media. He then warned he would take decisive measures, which he's been doing ever since.

"When a president in a Third World country says that we failed to control the media, this means that there is no harassment of the media," Ghandour said on Conflict Zone in defense of Bashir's statement.

"Our press is much more critical of the government than you may expect."

The UN's independent expert on Sudan has requested that the government amend the "Press and Publication Act" to give more protection to journalists, but so far, this hasn't happened yet.

Ghandour said that a press law is in the works.

"In the next meeting of the National Assembly, the press law will be one of the first to be seen and visited by the parliament." 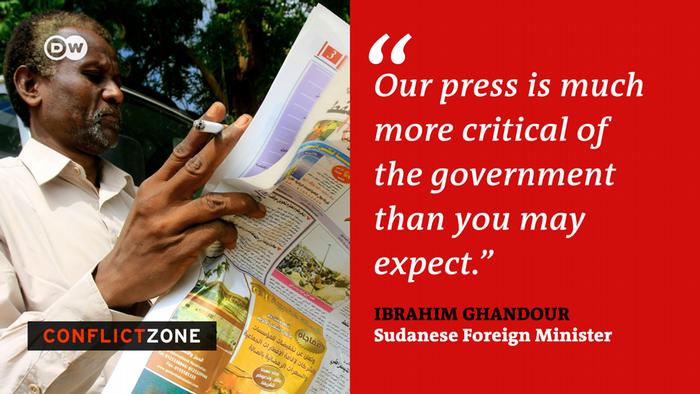 According to Transparency International, "corruption is present in all sectors and across all branches and levels of the [Sudanese] government."

The NGO says "public servants are known to demand bribes for services that individuals or companies are legally entitled to."

And "government officials hold direct and indirect stakes in many enterprises."

In fact, the International Crisis Group identified at least 164 companies in a range of sectors that were owned or controlled by the Sudanese military, police or officials from the intelligence service.

"This is a generalization, an unfair generalization," Ghandour said on Conflict Zone. "Privatization is under way. We are now following a free market economy. We are privatizing all our companies."

But only a few weeks ago, Sudan's auditor general accused 15 government-owned companies of manipulating their 2016 accounts, hiding surplus revenue, profits and investments. 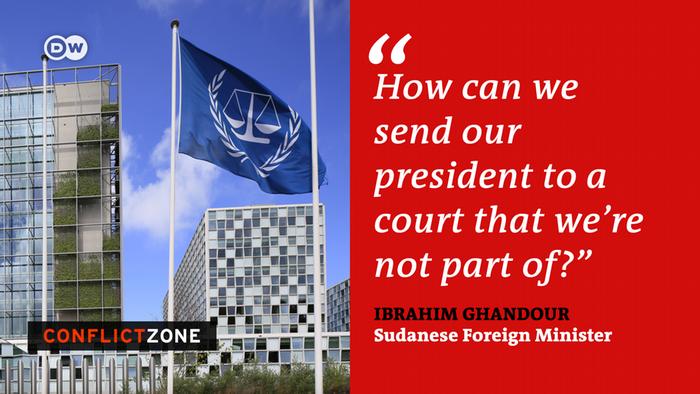 'We must keep African causes and problems within Africa'

The International Criminal Court (ICC) issued arrest warrants in 2009 and 2010 against Sudanese President Omar al-Bashir with three counts of genocide. Bashir has denied the charges.

Asked why he won't go before court and clear his name if he's innocent, Ghandour said:

"How can we send our president to a court that we are not party to?  (…) We must keep African causes and problems within Africa."

He said an African ICC chief prosecutor, Gambian Fatou Bom Bensouda, "does not make it an African court."

The rights group Human Rights Watch says that more than 200 women and girls were raped by members of the Sudanese army in a 36-hour assault on the north Darfur town of Tabit beginning on October 30, 2014. (11.02.2015)

Darfur marks an end of transitional government's term. But Darfuri refugees still feel unsafe as the conflict continues in parts of the region. (06.09.2016)

US to ease decades-old sanctions against Sudan

The US says it will soon end tough sanctions on Sudan, giving it access to the global banking system. But President al-Bashir remains a war crimes suspect, and Sudan stays on the US list of state sponsors of terrorism. (06.10.2017)