13 years, 1 billion dollars, 2 convictions: Is the International Criminal Court worth it? | World | Breaking news and perspectives from around the globe | DW | 27.01.2016

13 years, 1 billion dollars, 2 convictions: Is the International Criminal Court worth it?

Does the ICC have a racial bias? Does it lack legal authority in multiple instances? This week on DW's Conflict Zone is the court's Chief Prosecutor Fatou Bensouda.

Some 13 years after it started operating, The International Criminal Court (ICC) in The Hague is struggling with allegation of inefficiency, delayed justice and a bias against Africa. The election of Ms. Fatou Bensouda, of Gambian decent, as the Chief Prosecutor of the court in December 2011 was seen as the answer to the growing criticism by many.

However, three and half years into her tenure, it seems like the challenges facing prosecutor Bensouda and the court are only growing.

In an exclusive interview to Tim Sebastian on Conflict Zone, Mrs. Bensouda denies a rift with her home continent: "I do not think that the voices of a few leaders, or of a few people from Africa should be used to disregard the support that we still have in Africa. We do have support in Africa. (...) I think it is correct to say that most of our cases or all of our cases at the moment are in Africa. But that is not the whole picture."

23 cases in 9 situations have been brought before the ICC thus far – all from Africa. All 32 individuals who have been indicted so far are African. Louise Mushikiwabo, Foreign Minister of Rwanda, recently asked on DW: "Where is a white man convicted by the ICC?" John Mahama, President of Ghana, acknowledged that while the ICC has relevance in his view, Africa "feels targeted" by it. 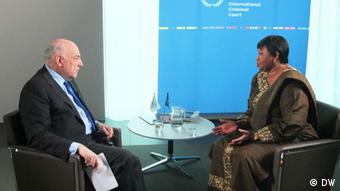 However, Bensouda insists this does not fully represent the court's actions: "It is correct to say that most of our cases or all of our cases at the moment are in Africa. But that is not the whole picture". Bensouda has opened preliminary probes into alleged crimes in Palestine, broadened the scope of an initial inquiry in Ukraine, and asked the ICC to open a formal investigation into the 2008 Russia-Georgia war, in addition to on going investigations on situations in Afghanistan, Colombia and Iraq.

Mrs. Bensouda also expresses support for the establishment of an African high court for justice: "I don't know why what they are doing, setting up their court, should be a slap in the face for ICC. Setting up a court to try these atrocity crimes is also not against ICC principles. In fact, the ICC is a court of the last resort. We will be encouraged by national jurisdictions taking up their responsibility to investigate and prosecute these crimes."

A lack of authority?

The ICC was established based on the 1998 Rome Statute, which gave it the mandate to to persecute "unimaginable atrocities that deeply shock the conscience of humanity". This often creates structural problems within the ICC: The prosecutor can only investigate and go after crimes that have been committed in states that are part of the ICC statute or have accepted the jurisdiction of the ICC, which is the reason why investigating war crimes commited by Israel proves difficult. The same goes for Iraq and Syria, whose governments haven't granted the ICC jurisdiction over its territories. 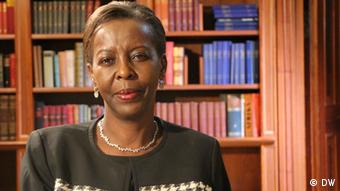 Louise Mushikwabo questioned the impartiality of the ICC on Conflict Zone in October 2015.

The case of al Bashir

Another way for the court to intervene is by a referral from the UN Security Council – like in the Darfur and Sudan situation. An arrest warrant against Sudanese President Omar al Bashir has been issued in 2009 for a number of crimes including genocide. Despite that, al Bashir remains free and travels freely to this date which Tim Sebastian calls a "huge blow to the ICC's credibility".

Tim Sebastian: "You’re like the surgeon who comes to a patient. The patient dies and you are saying: 'But it was a great operation. We did a great job, but the patient died.' You didn’t get the result you wanted. This was a failure for the ICC."

Fatou Bensouda: "It is not a failure for the ICC, because that responsibility is not ours.

In December 2015, Prosecutor Bensouda approached the UN Security and pleaded for more support in bringing to justice President Omar Al-Bahir of Sudan. She refuses to take responsibility for the failure: “They have a responsibility, the UN Security Council, to support the ICC, to support the office of the prosecutor in the investigations of this case and they are not doing that. I therefore will have to keep on reminding them that that responsibility, that duty is theirs”.

A "Climate of Fear" in Gambia

So what's the point of the court if some of the worst crimes of humanity cannot be convicted? The court has only carried out two convictions so far: "What is more important [than convictions] is the impact that the court has had so far in its infancy," she tells DW.

Then there is the case of Bensouda's home country Gambia. Human Rights Watch last year reported that the Gambian population live in a climate of fear in which government, justice and accountability for abuses are beyond reach, issues Bensouda has yet to address.

Amid these harsh accusations, several leaders of the African Union have suggested installing an African Human Rights Court at the African Summit in 2014. When asked by Tim Sebastian whether this proposal was a "slap in the face", Bensouda disagrees: "In fact, ICC is a court of last resort. We will be encouraged by national jurisdictions taking up their responsibility to investigate and prosecute these crimes."

Prior to being elected ICC chief prosecutor in 2012, Fatou Bensouda was Deputy Prosecutor at the court from 2004 until 2012. She was also Attorney General and Minister of Justice where she served as Chief Legal Advisor to the President and Cabinet of The Gambia. Bensouda obtained a masters degree in International Maritime Law and Law of The Sea.

Is the ICC just a drop in the ocean that remains silent when it really counts? Find out on Conflict Zone on January 27.

Is the ICC nothing but a tool of Western imperialism? Some of your reactions to Conflict Zone with Fatou Bensouda. (02.02.2016)

The Palestinian Authority has presented alleged evidence of Israeli war crimes to the International Criminal Court. Israel has not signed on to the statute of the ICC, which started in 2002. (25.06.2015)

The International Criminal Court has said there is evidence of "Islamic State" war crimes, but that it lacks jurisdiction to open an investigation into the group's activities in Iraq and Syria. (08.04.2015)