Right-wing Hindu groups target Christmas in India | Asia| An in-depth look at news from across the continent | DW | 22.12.2017 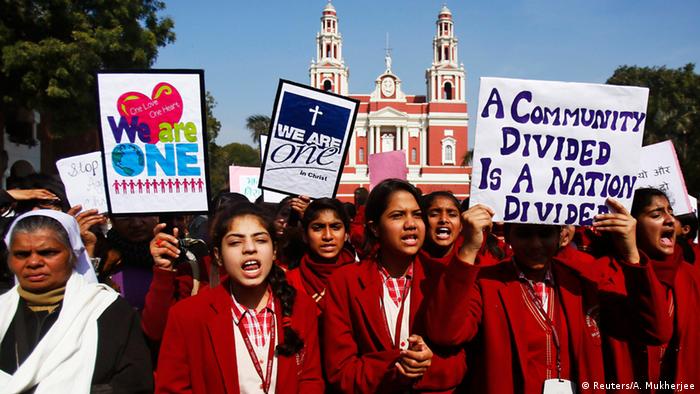 Earlier this week, a group of men, reportedly members of the hardline Vishwa Hindu Parishad, disrupted a Christmas event that was organized for an indigenous community in Pratapgarh town in the northern state of Rajasthan.

The group snatched microphones, threw away Christmas calendars and books on the gospels, and accused the organizers of carrying out religious conversions under the pretext of celebrating Christmas.

Yet, authorities made no arrests.  "Instead of taking action against these anti-social elements, they began questioning us as if we had ulterior motives," Laxman Meena, secretary of Masih Shakti Samiti, which had organized the Christmas event, told DW.

Read more: India's religious conversions: 'Modi can stop them if he wants'

Meanwhile, the Hindu Jagran Manch (HJM), a right-wing Hindu group, warned Christian schools in the city of Aligarh, in the northern state of Uttar Pradesh, not to celebrate Christmas as it may induce students to embrace Christianity.

The group members alleged that Christmas celebrations in schools with majority Hindu students are akin to "forced conversions."

"We will decide on a course of action on receiving the schools' response," said Sonu Savita, city president of the HJM.

Adding to the pattern of violence against Christians, a mob linked to yet another right-wing Hindu group, Bajrang Dal, attacked Catholic carol singers in the central state of Madhya Pradesh's Satna district last week.

Instead of holding the perpetrators to account, authorities charged the Christian group for outraging religious feelings under the state's draconian anti-conversion law. The group, however, denies the charges and claims they were only visiting the villages to sing songs.

All these incidents have occurred in states ruled by the Prime Minister Narendra Modi's Bharatiya Janata Party (BJP).

"This is almost déjà vu and these Hindu groups are once again trying to create a notion of 'the other.' And to achieve their objective they are mobilizing their cadres and creating a climate of fear. Why are authorities being tolerant and accommodative of these groups?" Father Pius Malekandathil of the Center for Historical Studies of Jawaharlal Nehru University told DW.

Attacks on Christians in India - who constitute just over 2 percent of the country's 1.2-billion-plus population - is nothing new. But they have become more frequent since Modi's ascent to the helm in 2014, and his administration has faced censure for emboldening extreme Hindu nationalists who have also attacked Muslims in a spate of cow vigilante violence over the past two years.

The BJP believes in what is known as Hindutva – a Hindu supremacist ideology. And Christian groups accuse the BJP and its ideological mentor, the Rashtriya Swayamsevak Sangh or RSS, of tacitly supporting Hindu fringe groups.

"All this is part of the Hindu right's fear of greater diversity in India. They do not want Indian Hindus to be 'contaminated' by anything that is not their version of Hinduism. And because they are in power, these groups feel that they can use violence to enforce their viewpoint and force everyone to toe the line," Sunil Michael Caleb, principal of the Bishop's College of Calcutta, told DW.

Culture of intolerance and hate

Right-wing Hindu groups allege that some Christian books insult Hindu and tribal religions, but church officials dismiss these accusations. They claim the idea behind the allegations is to pit Hindus and non-Christian tribal groups against Christians.

According to "Open Doors," a monitoring organization that serves persecuted Christians worldwide and lists countries where practicing Christianity is a high-risk activity, the situation in India for Christians has deteriorated over the past four years.

Hindu groups, meanwhile, have implemented mass programs to what they claim to be reconversion of minorities into Hinduism. The so-called "ghar wapsi" - or "homecoming" - program is often accompanied by violence and assisted by sympathetic administrative machinery in the states governed by the BJP.

Civil society activists have labeled these incidents as an effort to polarize the country along religious lines.

"These developments threaten not just secularism, but also India's constitution and democratic fabric.  The violence perpetrated by groups who claim to be ‘nationalists' and have taken upon themselves the mantle of protecting 'nationalism' and 'religion' is disgraceful," said Theodore Mascarenhas, secretary general of the Catholic Bishops' Conference of India.

At least 16 people have been killed after a truck carrying villagers to church overturned on a mountain road in northern India. Police said that the driver lost control after hitting a concrete barrier. (26.02.2017)