A South Korea paper citing an anonymous source said that Kim Hyok Chol was accused of being a US spy and killed. Several officials who also worked on the meeting with the US have been killed or jailed, the paper said. 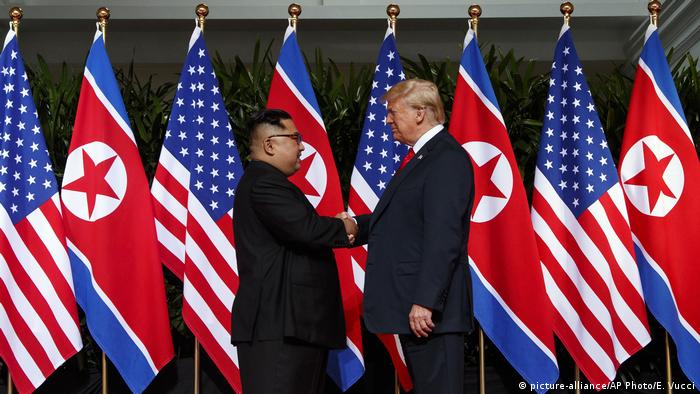 North Korea has executed its special envoy to the United States and several other officials who worked on the February summit with the United States, South Korea's Chosun Ilbo newspaper reported on Friday. Kim Hyok Chol was allegedly killed in March after the meeting in Hanoi ended without an agreement.

"He was accused of spying for the United States for poorly reporting on the negotiations without properly grasping US intentions," a source in North Korea told the Chosun Ilbo newspaper in Seoul.

He was executed in March at Mirim Airport in Pyongyang on his return from the summit, the source said. He was the counterpart to US special representative Stephen Biegun in the run up to the talks, which ended abruptly after the US refused to roll back sanctions unless North Korea was to offer a "comprehensive roadmap" to nuclear disarmament.

South Korean media and their readers have an understandably keen interest in their secretive neighbors to the north. Several major scoops in the national press about the regime in Pyongyang have later proven to be inaccurate, including stories in the Chosun Ilbo.

Chosun Ilbo also reported that a new translator on the North Korean team was sent to a prison camp for an error made at the summit. According to another unnamed source, she failed to translate a last-minute offer from Kim, delivered as US President Donald Trump was threatening to walk away from the talks.

Senior party official Kim Yong Chol, who had worked with US Secretary of State Mike Pompeo in the talks, was also sent to a work camp, the paper wrote.

On a visit to Berlin, Pompeo told reporters that he had heard about the story. "We're doing our best to check it out. I don't have anything else to add to that today."

The South Korean Unification Ministry and President Moon Jae-in refused to comment on the story until it is confirmed.

North Korean propaganda outlets did not immediately comment on the story on Friday. However, just the day before the report, North Korea's official party mouthpiece Rodong Sinmun warned that "two-faced" party officials would face the "stern judgement of the revolution."

"It is an anti-Party, anti-revolutionary act to pretend to be revering the leader in front of him when you actually dream of something else," the paper said in an editorial.

Since the breakdown of talks with the US in February, North Korea has tried to put pressure on Washington by carrying out two short-range missile tests.

North Korea's Kim Jong Un has travelled to Russia ahead of his talks with President Vladimir Putin in Vladivostok. Amid stalled nuclear talks with the US, Kim is expected to seek diplomatic assistance from the Kremlin. (24.04.2019)

US and South Korea to scrap major military exercises in spring

The annual large-scale joint military exercises, which have frequently infuriated North Korea, will be replaced with smaller drills. The scale-backs come on the heels of Donald Trump's summit with Kim Jong Un. (03.03.2019)