Putin says Russian navy will be armed with hypersonic weapons

The Russian president has said that the Russian navy will have 40 new ships and vessels this year. Putin also said the navy will get hypersonic weapons to boost Russia's combat capabilities. 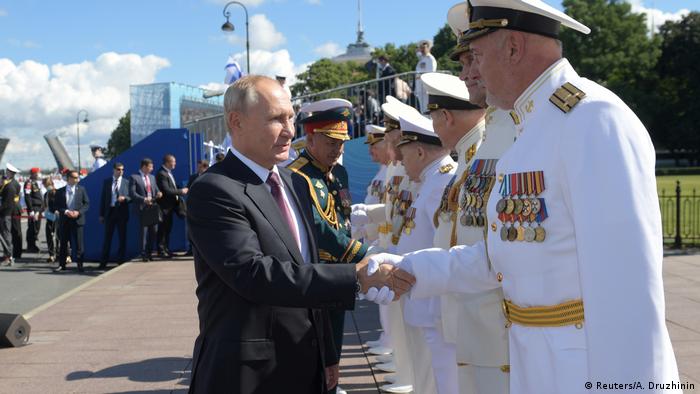 Russian President Vladimir Putin announced on Sunday the Russian navy's capabilities were growing and that it would be equipped with hypersonic nuclear strike weapons and underwater nuclear drones.

According to Putin, Russia would be armed with 40 new vessels this year but he did not specify when it would receive new hypersonic weapons.  The Russian defense ministry said the weapons were in their final phase of testing.

"The widespread deployment of advanced digital technologies that have no equals in the world, including hypersonic strike systems and underwater drones, will give the fleet unique advantages and increased combat capabilities," Putin said in St Petersburg at an annual naval parade that displays the country's best nuclear submarines, ships and naval aviation.

"Six more vessels for the far-sea zone were laid down at Russia's three leading shipyards" in the past few days, Putin said during the opening of the parade.

The combination of maneuverability, speed, and altitude of the hypersonic missiles makes them capable of traveling at more than five times the speed of sound and therefore difficult to track and intercept. Some analysts, however, have questioned how advanced the weapons really are.

The Poseidon and Tsirkon

Some of the weapons have yet to be deployed, the ministry said, including the Poseidon underwater nuclear drone intended to be carried by submarines, and the Tsirkon hypersonic cruise missile, designed to be carried on surface ships.

In a separate statement released by local news agencies, the defense ministry said testing of the Belgorod, the first submarine capable of transporting the Poseidon drones, has begun and that testing was nearing completion.

"Work is being successfully completed to create modern weapons systems for the navy," it was cited as saying.

Putin has said Moscow does not want an arms race but last year threatened to set hypersonic missiles on ships and submarines that go beyond US territorial waters if Washington moved to deploy intermediate-range nuclear weapons in Europe.

Sunday's parade marking Russia's Navy Day in St. Petersburg and the nearby town of Kronshtadt featured 46 ships and vessels and more than 4,000 troops. Putin said on Friday that the parade demonstrates "the growing power of our navy."

Similar parades also took place in the Far Eastern cities of Vladivostok and Petropavlovsk-Kamchatsk, Sevastopol in the annexed Crimea, the seaport towns of Severomorsk and Baltiysk, Kaspirsk in the south of Russia and the port city of Tartus in Syria.

Earlier this week, Putin attended a ceremony of keel-laying of new warships in Crimea and said Russia needs a strong navy to "help maintain a strategic balance and global stability."

Russia has rejected accusations from the West that it tested an anti-satellite weapon in Earth orbit as "propaganda." Both sides accuse each other of seeking to militarize space in breach of international law.

In a lengthy article, Vladimir Putin insists on recognition of the Soviet Union as the prime defeater of Nazi Germany, censures Poland's actions before the war and defends the annexation of Lithuania, Latvia and Estonia.