The two-year prison sentence for Russian punk band Pussy Riot has drawn worldwide condemnation. Politicians and human rights activists see the verdict as being politically motivated and way too harsh. 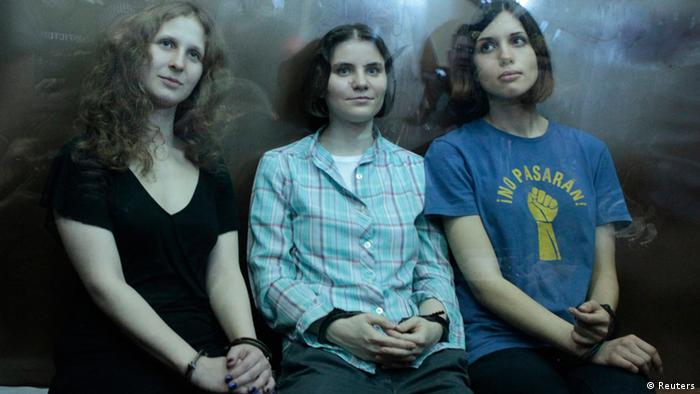 Author Boris Akunin had a biting metaphor to describe the consequences of the Friday indictment of Russian punk rock band Pussy Riot.

By iceberg, Akunin was apparently referring to the Russian people's support of Putin. On Friday (17.08.2012), the author joined several hundred others at Khamovniki district court in Moscow to protest the body's ruling. The process has also received widespread condemnation outside Russia. 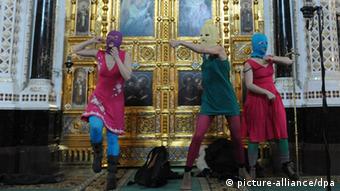 In their song, the band asks the Virgin Mary to "drive out Putin"

The court sentenced Maria Alyokhina, Nadezhda Tolokonnikova and Yekaterina Samutsevich to two years in prison on charges of hooliganism motivated by religious hatred.

The defendants performed an anti-Putin song inside Moscow's Christ the Savior Cathedral in February. They jumped and danced in front of the altar in scenes filmed by a fellow member of Pussy Riot and later edited for a now-famous video clip. In their song, the group asks the Virgin Mary to "drive out Putin."

"This is a very severe ruling because the girls are not guilty of anything," she said.

Alexeyeva also called the ruling stupid, saying it would damage the already tarnished image of the Russian government and Orthodox Church.

The verdict drew similar condemnation from Amnesty International, the Organization for Security and Cooperation in Europe and the European Commission.

The ruling also made waves in Germany. "This is definitely a disproportionate sentence," German Human Rights Commissioner Markus Löning told DW. "The fairness of the trial could also be called into question."

He added the verdict showed "the bitter truth" that "freedom of expression is not currently guaranteed in Russia."

Löning appealed to Putin to set an example and free the three women. "Two of them have small children," he said. "They should be with their families, not in prison." 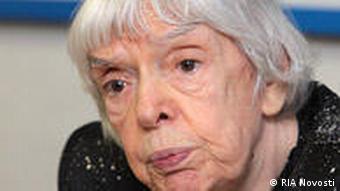 "It sends a signal to Russian society," he said, that "whoever criticizes the regime, instead of subordinating his will to it, will be viewed not as a partner but a threat that must be combated."

Schockenhoff is co-chair of the ruling Christian Democrat and Christian Social Union alliance in Germany's lower house of parliament, the Bundestag. He is also coordinator for German-Russian cooperation at the German Foreign Ministry.

"After an unfair trial, it is an inappropriate verdict," he said. "The penalty is disproportionate to the actual situation."

Experts including Eberhard Schneider of the EU-Russia center in Brussels think the Pussy Riot verdict has a political basis. He said their prison sentences shows how much pressure protests have put on the Kremlin in recent months. For more than six months, protesters have demonstrated against Putin and his system. 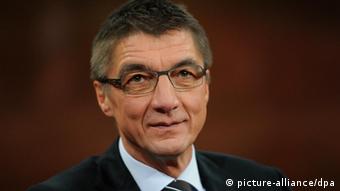 Schockenhoff sees the trial as setting a precedent

Schneider thinks the Kremlin exerted its influence over the court that tried the Pussy Riot members. He pointed to Putin's remarks on the case. The Russian leader previously said the women should not be too severely punished, and the judge indeed refrained from giving them the maximum seven-year sentence.

However, Schneider said the case shows "reflexes from the Soviet system, in which there is no real separation between the executive and judicial branches of government" were still in effect.

Reactions to the verdict were mixed in Russia itself. While the opposition and human rights activists made sharp criticism, the pro-Kremlin United Russia party voiced its approval. Parliamentarian Alexei Tschesnakov said the verdict was appropriate and would deter acts similar to Pussy Riot's. Prior to the ruling, the Russian Orthodox Church for its part called on the state to show "grace within the law."

Russia has used the trial against three young women to set a precedent. The verdict is nothing short of a scandal that puts a strain on German-Russian relations, says Bernd Johann. (17.08.2012)