Opinion: Pussy Riot verdict an outrage | Europe| News and current affairs from around the continent | DW | 17.08.2012

Russia has used the trial against three young women to set a precedent. The verdict is nothing short of a scandal that puts a strain on German-Russian relations, says Bernd Johann.

Whoever thought the Russian state was able to demonstrate any form of lenience or clemency towards its opponents has been proven seriously wrong. The verdict against the three women of the punk band "Pussy Riot" is not just a harsh punishment that will affect the accused artists personally.

This trial has been used to set a precedent: Anyone in Russia who chooses to publicly speak out against the authoritarian Putin system, especially if it involves breaching the law, is going to feel the full force of the establishment. 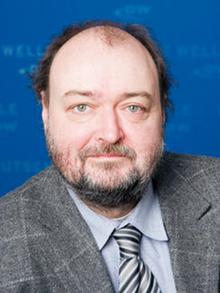 Bernd Johann: Pussy Riot verdict is nothing short of a scandal

There's no question about it. The public act of the punk activists at the Moscow Cathedral of Christ the Savior in February was a scandal. Certainly it had the potential for hurting people's religious beliefs. And certainly - according to German legal standards, too - such action within a church could be prosecuted on the basis of going against the freedom of practicing religion. Within that, the freedom of expression and the freedom of religion each put limitations on the other.

But in a case like this, genuine rule of law commands the weighing of both rights against each other. This hasn't happened in Moscow. For the judge it was enough to simply state that "this wasn't art, but hooliganism stemming from religious hatred." The trial against the three women wasn't anything but a show trial. They were in pre-trial custody for almost half a year. Shortly after their public protest, they were ruthlessly separated from their families and little children.

All this despite the fact that the protest happened without any violence. No one was actually hurt. There was no doubt about what had happened, and the women didn't deny the charges. And that means it would have indeed been possible for the court to show lenience and mark what had happened off as bad taste nonsense of some young people.

Instead, the women were treated like dangerous criminals. They had to endure the trial handcuffed and locked up in a glass cage. The court gave little room for the defense to make its case. The accused, too, were barely able to tell their side of the story - and when they could, they focused on criticizing the Putin government as a repressive regime. There was no sign of religious hatred - it was clearly a political protest.

Politicians and members of the clergy as prosecutors

As things went, it turned out to be a bizarre trial - in the eyes of the world and those of the Russian public. Three young women in the role of David, who - in the end - couldn't do anything but lose against Goliath in the form of Putin's system. Kremlin supporting politicians and representatives of the Russian Orthodox Church surpassed each other in demanding draconian punishments - as if they themselves were the prosecutors in this trial.

Even Putin himself voiced his opinion in this matter. Without any political reticence he expressed the expectations he had of the trial, and by doing so further encouraged doubts about the independence of the court.

The verdict becomes a dark omen for Putin's third term in office - a technocrat of power, who only managed to reemerge as Russia's leader by tricking the constitution itself. His first 100 days in office have clearly showed that there will be no further political liberalization. During the past weeks, members of the opposition have been browbeaten - also by exploiting the legal system. The demonstration law has been drastically tightened, and NGOs have seen further curtailing of their work.

These developments, now including the verdict against the all-female punk band, are going to put a strain on German-Russian relations. Rarely has there been such a wave of protest against a trial in Russia - throughout all political ranks and all parts of society. In bilateral discussions, the German side increasingly asks the question whether a dialogue with Russia is at all possible when it comes to civil rights and society.

After the verdict against Pussy Riot, politicians in Berlin could find themselves forced to reevaluate the traditionally close and positive relations Germany has with Russia.