Pubs and clubs in German town of Freiburg forbid refugees

A group of nightlife spots in the German city of Freiburg have banded together to bar refugees following a string of reported crimes. The city sells itself as being all inclusive. 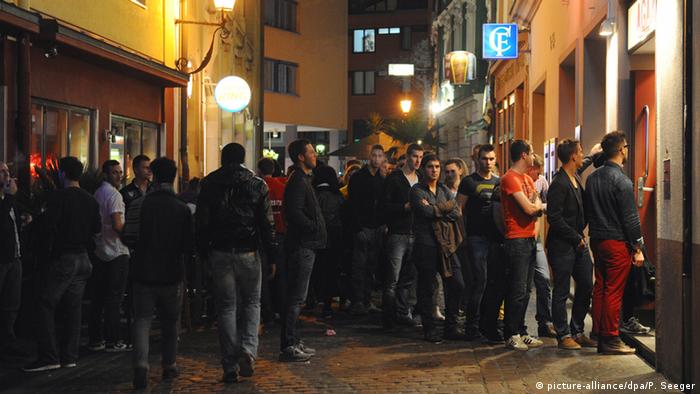 Freiburg, Germany prides itself on being the country's "Green City," a friendly, open place where a family of four is more likely to own a tandem bike than a station wagon. On Saturday, however, the small city on the edge of the Black Forest in the south of the country was splashed across the German media for a much different reason - the decision by a group of clubs and bars to keep refugees out.

According to reports, a wave of pickpocketing and sexual assaults preceded the decision in the university town where thousands of students flock to bars every evening. After a series of sexual assaults in the city of Cologne on New Year's Eve, the line between welcoming refugees and providing security has become a flashpoint across the country.

Regional newspaper "Badische Zeitung" wrote that the city had invited a group of club owners to a round table at city hall to discuss the ban.

The city official in charge of social affairs, Ulrich von Kirchbach, reacted angrily to the measure. Badische Zeitung quoted him as saying that "a rule such as this is contrary to rules against discrimination."

Von Kirchbach added the caveat that "of course we cannot allow lawlessness anywhere," and anyone who commits a crime "must be prosecuted under the law."

While no one yet knows if the ban will affect any change in Freiburg nightlife, police chief for North Freiburg, Harry Hochuli, told "Badische Zeitung" about a similar measure from a decade past that worked well at curbing petty crime. A group of bars and clubs, alongside the city government and police department, organized themselves under the motto "Kicked out once, you're not going back in anywhere," meaning a ban from one location meant a flat ban across Freiburg.

German determination to maintain an open society has stretched to breaking point in recent weeks, particularly after revelations that police in Cologne downplayed the nationality of many perpetrators because it might be "politically uncomfortable."

Even Chancellor Angela Merkel, who all through summer and autumn staunchly defended her open-door policy has had to backtrack to closing German borders after losing political support, even from within her own party, for her stance.

As many EU countries introduce new rules governing who may cross their borders amid the massive influx of migrants, many people looking for safe refuge are in limbo at the frontiers. Alison Langley reports from Slovenia. (23.01.2016)