The leader of the Catholic Church went off script to denounce the conditions refugees face after entering Europe. Pope Francis was leading a service in Rome for modern-day Christian martyrs when he made the comparison. 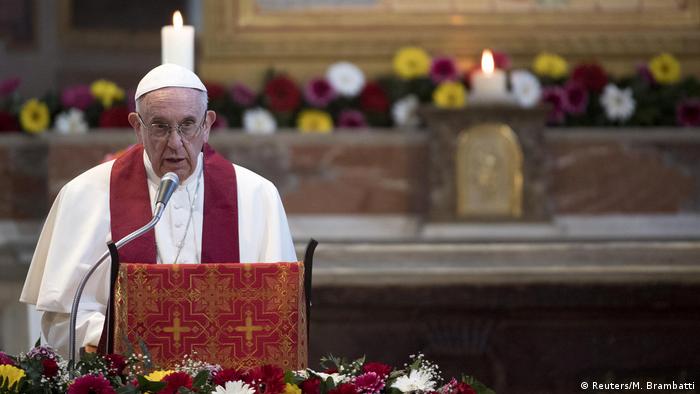 During a service on Tiber Island in central Rome on Saturday, Pope Francis made a comparison between refugee camps and Nazi concentration camps.

Pope Francis recalled meeting a refugee in a camp on the Greek island of Lesbos in 2016.

Pope Francis made the comment at the Basilica of St. Bartholomew during a service for modern-day Christian martyrs. The man he met in Lesbos was a Muslim from the Middle East, whose Christian wife's throat was slit in front of him after she refused to throw her crucifix to the ground. Pope Francis said he wanted the woman to be remembered along with those commemorated in the basilica. The basilica is dedicated to the memory of Christian martyrs in recent history and includes relics of Christian martyrs over time.

Pope Francis spoke before his homily, as well as friends and relatives of slain Christians. The sister of Father Jacques Hamel, who was killed in an Islamist attack in France last year, also spoke before the congregation.

Following Saturday's service, Pope Francis met with migrants from Lebanon who were airlifted out of the country through a Christian-sponsored mission. While there, he addressed crowds and praised European countries for "bearing this extra burden."

However, the pope criticized Europe's refusal to allow new migrants into the continent, likening it to "suicide."

"We live in a civilization that is not having children, but also closes its door to migrants: this is called suicide," said Pope Francis. According to the US Central Intelligence Agency (CIA), European countries made up 14 of the 20 nations with the world's lowest birth rates.

The pope expressed his frustration at the international treaties that have made migrants' travels into Europe more difficult.

"It seems that international accords are more important than human rights," said Pope Francis. Humanitarian groups have also decried the efforts to stem the flow of migrants into Europe.

The pope is scheduled to travel to Egypt April 28-29. At least 45 people were killed during Palm Sunday attacks on Coptic Churches in the country earlier this month.