Beata Szydlo has appeared to use a commemorative speech at the Nazi death camp to defend her anti-EU stance on refugees. The president of the European Council has condemned the comments as they launch legal action. 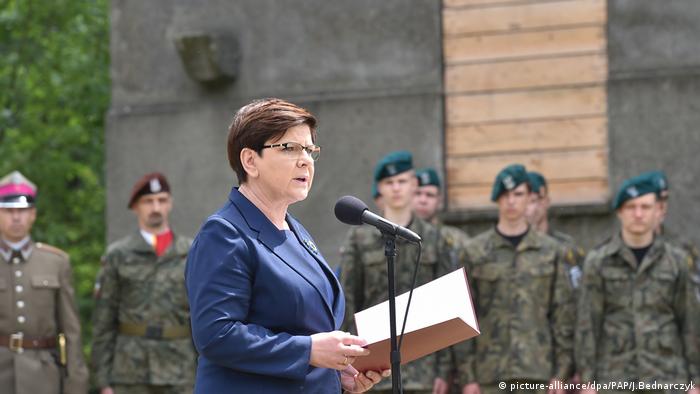 "In our troubled times, Auschwitz is a great lesson that everything must be done to defend the safety and the lives of citizens," Szydlo said at a ceremony marking the 77th anniversary of the Nazis' first transport of Polish prisoners to the camp.

Her comment was also posted on Twitter by her right-wing populist Law and Justice party, but deleted soon after.

Exploiting the cruelty of Auschwitz

Former Defense Minister Tomasz Siemoniak said in a tweet that Szydlo's remarks were a "discredit."

Szydlo's comment at Auschwitz caused an uproar on Polish social media as leading journalists and pundits questioned her motives.

"Szydlo showed today that she has no problems using both living Arabs and dead Jews in her primitive propaganda," said Tomasz Lis, the editor of the Polish version of Newsweek.

"Auschwitz must remind us of the need to defend universal human rights, not closing borders to refugees!" said Rafal Pankowski, the head of Never Again, an organization that fights neo-Nazism and other forms of extremism.

Taken out of context

In response government spokesman Bochenek accused Szydlo's critics of taking her comment, made during a speech honoring Auschwitz prisoners, out of context.

"If someone wants to, they will find bad intentions in any comment. I propose listening to the entire speech," Bochenek said on Twitter.

Read: Why one of Auschwitz's last remaining survivors wrote a memoir decades later

Read: Pope Francis defends his use of term 'concentration camps' for migrant housing

In the speech, Szydlo said it was a great task for politicians to make sure that "such terrible events as those that took place in Auschwitz and other places of martyrdom never happen again."

Poland, Hungary and the Czech Republic all refused to comply with an EU program to relocate 160,000 migrants from frontline migrant crisis states Italy and Greece. The EU set up the plan in 2015, when migration from Africa and Middle East - in large part people fleeing Syria's civil war - was at its peak.

The program faces strong resistance in Poland, which Szydlo's government has used to gain domestic support.

Estimates vary, but more than a million people, mainly European Jews, are thought to have been gassed, shot or hanged at the camp, or to have died of neglect, starvation or disease during the Holocaust, before the Soviet Red Army entered its gates in January 1945.

The horrors of Auschwitz in art

Surviving was a daily struggle during the Holocaust. Some of the people persecuted in concentration camps, ghettos or living underground managed to document in their work the indescribable horrors they faced. (26.01.2015)