Poland, Hungary and the Czech Republic are under fire for refusing to cooperate with a contentious migrant-sharing plan. Only a fraction of the planned number of refugees have been resettled. 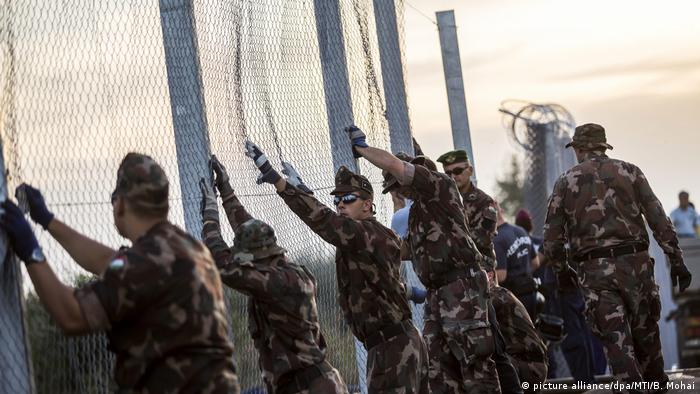 The European Commission announced on Tuesday that it would pursue legal action against Hungary, Poland and the Czech Republic for refusing to participate in a controversial scheme aiming to distribute refugees more equitably among EU member states.

"Europe is not only about requesting funds or ensuring security," said Migration Commissioner Dimitris Avramopoulos. "Europe is also about sharing difficult moments and challenges and common dramas."

According to a press release from the commission, the three countries were allowing Rome and Athens to unfairly shoulder the brunt of the burden that affects the entire bloc, ignoring an agreement to take on more asylum seekers. The statement further says that the EU must "redouble our efforts" if it hopes to prevent the "tragic loss of life in the Mediterranean."

"For this reason the [European] Commission has decided to launch infringement procedures against these three member states," Avramopoulos said.

The scheme, first agreed upon in 2015, has seen only 20,000 of the proposed 160,000 migrants moved from the overwhelmed authorities in Italy and Greece, leaving many people in desperate conditions.

Czech Prime Minister Bohuslav Sobotka did not mince words in his retort to the news of a sanction.

"The Czech Republic doesn't agree with the relocation system based on migrant quotas. And given the worsened security situation in Europe and also that the quota system is not functioning, it won't participate in it."

Sobotka added that Prague would defend its position in the courts as long as necessary.

Warsaw's response was more muted. A spokesman for Prime Minister Beata Szydlo said that her government does not agree with the EU's decision to launch infringement procedures, but that it respected the Commission's prerogative.

Poland, Hungary and the Czech Republic have until Wednesday to change their minds and pledge to comply, Avramopoulos said, or face the legal consequences.

Documenting the refugee crisis authentically requires more than just a good eye. Photographer Kevin McElvaney gave cameras to migrants to take photos of their journeys to Europe. The images are now part of an exhibition. (07.06.2017)

The German government has significantly cut back on family reunions for refugees arriving from Greece, local media reported. Germany has taken in over a million people and is facing "limited capacity." (19.05.2017)