The researchers were accused of defaming a man whom they said aided in the killing of Jews. Critics say the Polish government is whitewashing the role that some Poles played in the Holocaust. 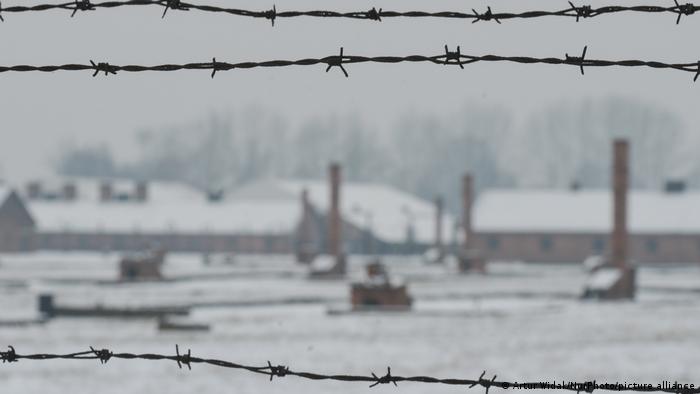 Two Polish historians were ordered by a Warsaw court on Tuesday to apologize to the niece of a World War II-era Polish mayor whom they reported in their book was complicit in the killing of Jews.

The ruling has been seen as a litmus test of whether independent Holocaust research is possible under Poland's nationalist government.

The researchers, Professor Barbara Engelking, chair of Poland's International Auschwitz Council, and Professor Jan Grabowski from the University of Ottawa, co-edited a 1,600-page book called Night Without End: The Fate of Jews in Selected Counties of Occupied Poland.

The work, published in Polish, documented cases of complicity of Catholic Poles during the Holocaust.

The case against the authors was brought by the niece of Edward Malinowski, who was mayor of the village of Malinowo in northeast Poland during the war.

The woman's lawyers had demanded the authors pay 100,000 zlotys ($27,000). However, the court rejected this, and ruled the authors submit a written apology for "providing inaccurate information."

The authors have said they will appeal against the decision.

Critics have accused Poland's nationalist government of attempting to cover up Polish officials' role in the genocide of Jews during Nazi German occupation in World War II and discourage academic research into cases of collaboration.

In a statement, Jerusalem's Yad Vashem Holocaust memorial  said the charges "amount to an attack on the effort to achieve a full and balanced picture of the history of the Holocaust" and "constitutes a serious attack on free and open research."

What is the trial about?

The niece, 81-year-old Filomena Leszczynska, is being supported by the Anti-Defamation League — an organization that seeks to defend "Poland's good name."

The group claims the two academics smeared an innocent man and deprived the niece of her rights, including the right to pride and national identity.

The book mentions that the mayor may have been implicated in the local massacre of Jews by German soldiers.

But Leszczynska said her late uncle in fact helped Jews and points to "omissions" and "methodological errors" that make her uncle appear as someone who betrayed Jews to the Germans.

According to the book, Malinowski allowed a Jewish woman to survive by helping her pass as a non-Jew. However, the survivor's testimony is also quoted as saying that he was an accomplice in the deaths of several dozen Jews.

Malinowski was acquitted in 1950 of being an accomplice to the killing by Germans of 18 Jews in a forest near the village of Malinowo in 1943.

Why is this controversial in Poland?

Grabowski and Engelking argue that the case is an attempt to discredit them personally and dissuade other academics from investigating the truth about the extermination of Jews in Poland.

"This is a case of the Polish state against freedom of research," Grabowski told the AP news agency before the trial.

Grabowski, a Polish-Canadian whose father was a Polish Holocaust survivor, said he has faced anti-Semitic harassment by nationalists, both online and at lectures in Canada, France and other countries.

Poland's conservative ruling party Law and Justice, which rose to power in 2015, has focused on Polish heroism and suffering instead of wrongdoing during the wartime German occupation.

In 2018, Poland sought to pass a law that would have criminalized the act of mentioning any responsibility of the Polish nation or state in crimes committed by Nazi Germany on Polish soil. The law would have carried a three-year prison sentence, had it not been dropped following international outcry and a major diplomatic row with Israel.

The current case is instead a civil libel case tried under a pre-existing law, but academics warn that it will set a precedent for freedom of Holocaust research.

Nazi Germany occupied Poland in 1939, annexing part of the country to Germany and directly governing the rest.

Some people in Poland collaborated with the Germans in the hunting down and killing of Jews.

An estimated three million Jews and six million Poles perished between 1939 and 1945 during Nazi occupation.

Over 7,000 Poles have been named "Righteous Among the Nations" — the honorific used by Israel to describe non-Jews who risked their lives during the Holocaust to save Jews — more than any other nationality.

An abridged English version of "Night Without End" is due to be published in a few months.

The Warsaw Ghetto - Memories of Horror