The smallest and youngest of Germany's political parties is making big headlines. The 'Alternative for Germany' is scrambling to resolve a dispute in its leadership. DW takes a look at the source of the discord. 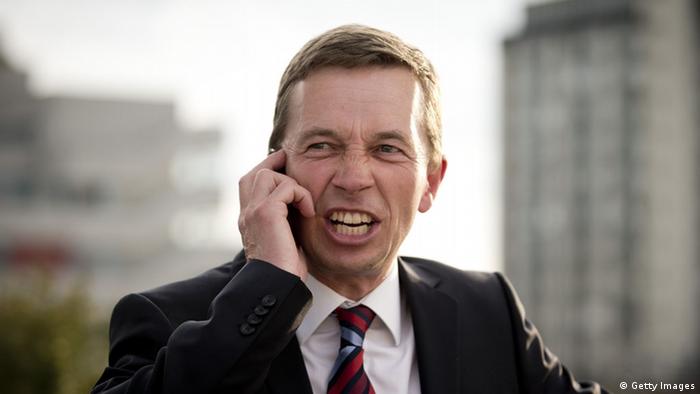 Among the tens of thousands of Germans set to continue marching in "defense of the West" in cities throughout the country this Monday, there seems to be at least one common denominator: a deep distrust of the German government and many of its current policies.

That distrust doesn't extend to all German political parties, however. One of those parties enjoys the support of over 75 percent of all PEGIDA marchers, according to a recent Stern poll, and that is the right-leaning, euro-skeptic political youngster, the "Alternative for Germany" (AfD).

With the PEGIDA protests gaining genuine momentum in German society, one could assume that these recent developments are further reason for the party's leaders to thank their lucky stars. However, the opposite appears to be true, as a rancorous - and very public - dispute has broken out in the top ranks of the party.

Division at the top

Across German media on Monday, articles could be read about the "power struggle" plaguing the AfD that had leaked into the public domain over the weekend. The squabbling concerns the face of the party - its founder, Bernd Lucke, and his co-chairs Konrad Adam and Frauke Petry. Lucke reportedly wants to turn that three into one and for that one to be him, as lone chair of the AfD. He has proposed a vote on his plans at a party conference at the end of January. 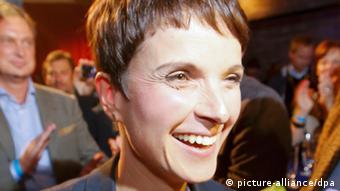 Petry has shown willingness to negotiate with PEGIDA organizers

Much of the media attention regarding the power struggle has focused on personal differences between the three co-chairs, with a number of outlets publishing a leaked letter to Lucke drafted by senior AfD members (including Petry and Adam) in which they criticized his "despotic leadership" and "unbridled ambition" as having motivated the plan to assume sole leadership of the party.

In the face of the growing anti-Islamization movement and its proximity to the AfD, however, the division within the top ranks of the party has taken on far more significance than mere personal differences between co-chairs. It concerns the party's future orientation, and, in particular, the question of how far to the right it is willing to go to entice voters.

Nothing to the right of Merkel

When Chancellor Angela Merkel explicitly rebuked PEGIDA marchers in her annual New Year's message, warning Germans against the "hatred in the hearts" of such people, the AfD quickly jumped at an opportunity to criticize what it sees as a government that doesn't understand - or lend a voice - to its people.

However, though Lucke criticized Merkel for her rash judgment of PEGIDA supporters, he himself has kept his distance from the anti-Islamization movement. Even for Lucke, who refers to his party as national conservative, endorsement of PEGIDA has proved too risky.

This reflects an adage in German political parlance that dates back to pre-reunification days, when Bavaria's Christian Social Union (CSU) chairman Franz-Josef Strauss famously said: "No legitimate democratic party can exist to the right of us."

Strauss was referring to the conservative alliance between Merkel's Christian Democratic Union (CDU) and its Bavarian sister party, and his utterance has essentially remained true ever since. Were Lucke to endorse the stance of the PEGIDA movement, it would send a clear signal with regard to the political orientation of his party.

And that, despite the wide reception PEGIDA has enjoyed among Germans since beginning with its marches in October. Latest opinion polls suggest some 30 percent of Germans are sympathetic to the movement's motives. 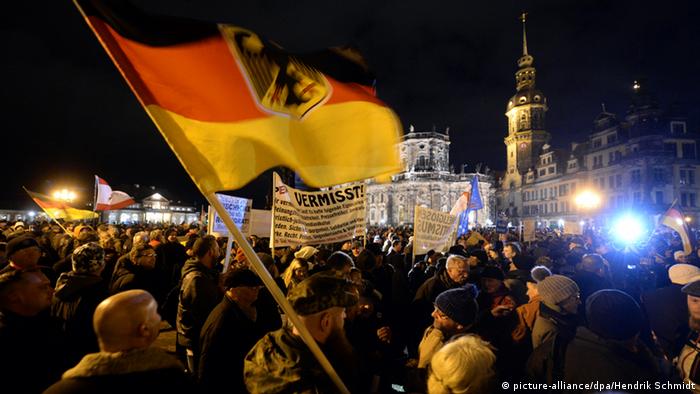 Talks between Saxon AfD and PEGIDA

Lucke's co-chairs see the situation differently. Apart from defending PEGIDA on a number of occasions, including in talk shows, Petry and Adam have repeatedly expressed a willingness to negotiate with the movement's organizers.

Petry, who is party chair in the eastern state of Saxon, has invited PEGIDA representatives to exchange ideas in parliament on January 7.

German Development Minister Gerd Müller has called for a fair discussion on the protests by anti-Islam movement PEGIDA. Müller said that Germany needed to address the fears of thousands of its citizens. (02.01.2015)

A key minister in Chancellor Angela Merkel's last government has criticized his former boss, claiming she has let her party be outflanked on the political right. The result, he said, was growing support for extremists. (28.12.2014)