Survey finds one in three Germans supports PEGIDA ′anti-Islamization′ marches | Germany | News and in-depth reporting from Berlin and beyond | DW | 01.01.2015

An opinion poll has found that one in eight Germans would join a march against "Islamization" if one were held in their hometown. A series of rallies in the city of Dresden have drawn growing numbers, with more planned. 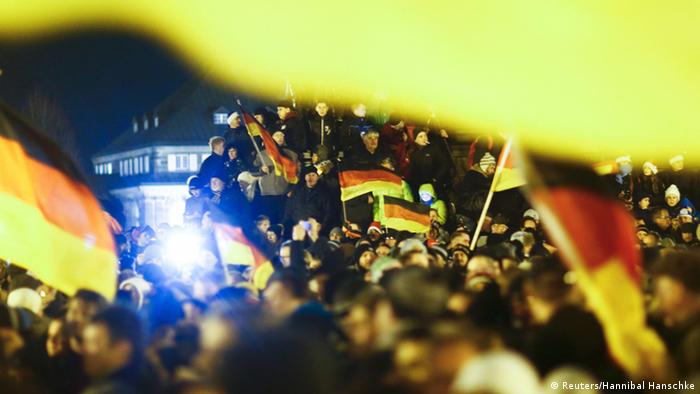 The poll of 1,006 people by German newsmagazine Stern found that 13 percent would attend an "anti-Islamization" march if it were held near their home.

The survey, while small, does show a level of support for the weekly rallies being held in the eastern city of Dresden, one of which attracted more than 17,000 people in the days before Christmas.

It also found that 29 percent of people thought the marches by the group PEGIDA, which translates to "Patriotic Europeans against the Islamization of the West," were justified because of the degree of influence that Islam was having on life in Germany.

Support for the marchers was particularly strong among supporters of the euroskeptic party Alternative for Germany (AfD), which recently has increasingly campaigned on an anti-immigration platform. The poll found that 71 percent of AfD supporters felt the rallies were justified.

About two thirds of Germans asked by the polling group Forsa felt that the threat that "Islamization" posed within Germany was being exaggerated by PEGIDA.

A few marches similar to PEGIDA's have taken place elsewhere and the group has said it is planning rallies in other German cities. Rallies have already been held in other cities including Düsseldorf, Kassel and Cologne.

Members of Merkel's conservative bloc have expressed concern that it is losing support to AfD, and said she should address some of the group's concerns. However, in her televised New Year message, Merkel accused PEGIDA leaders of peddling hatred.