Paraguay is the third country after the United States and Guatemala to move its embassy to the disputed city. The status of Jerusalem remains a major hurdle to a peace deal between Israel and the Palestinians. 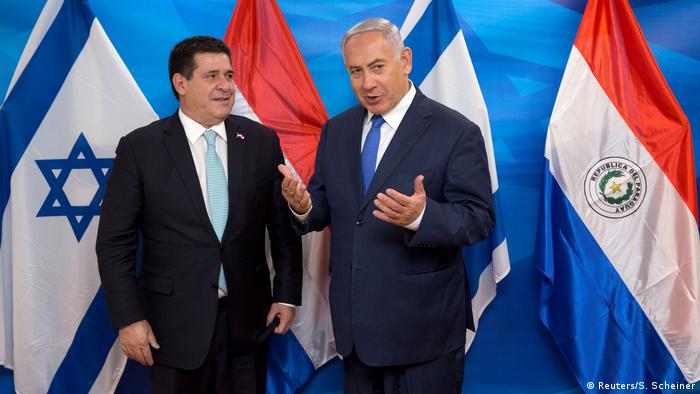 Paraguay opened its new Israel embassy in Jerusalem on Monday, following in the footsteps of the United States and Guatemala.

Last week, the US relocated its embassy to Jerusalem from Tel Aviv, infuriating the Palestinians. The US move was followed by Guatemala two days later.

Romania, the Czech Republic and Honduras have said they are also considering moving their embassies to Jerusalem.

Read more: Opinion: An anniversary, an embassy, and the destructive power of Donald Trump

The status of Jerusalem remains one of the biggest stumbling blocks in solving the conflict between Israel and the Palestinians, who with broad international backing want Israeli-annexed east Jerusalem as their future capital.

Israel regards the entire city, including the eastern sector that it captured in the 1967 Middle East war, as its capital. The annexation was never internationally recognized and most global powers want the city's final status to be agreed upon in a peace deal between the two sides.

"This is a historic day that strengthens ties between Paraguay and Israel," Cartes said.

"By adopting such a provocative and irresponsible measure that is in direct contravention of international law and consensus, Paraguay has conspired with Israel, the United States and Guatemala to entrench the military occupation and to seal the fate of occupied Jerusalem," Ashrawi said in a statement.

In December, US President Donald Trump recognized Jerusalem as Israel's capital, reversing decades of US policy. The move was seen as a setback to efforts to resolve the decades-old conflict between Israel and the Palestinians.

On Monday, the US officially opens its embassy in Jerusalem. The move has sparked strong international condemnation and comes as tensions grow between Israel and Iran. Tania Krämer reports from Jerusalem. (14.05.2018)

Moving the US embassy to Jerusalem could spark a "third intifada," Hamas leaders say. But what exactly is an intifada, and what did the first two mean for the conflict between Israelis and Palestinians? DW has the facts. (07.12.2017)