Pakistan′s Barelvis – Transformation from peaceful to violent? | Asia | An in-depth look at news from across the continent | DW | 11.12.2017

Often portrayed as proponents of "soft Islam," Pakistani Barelvis were believed to be providing the "counter-narrative" to hardline sects. But their last month's Islamabad siege demonstrates a worrisome metamorphosis. 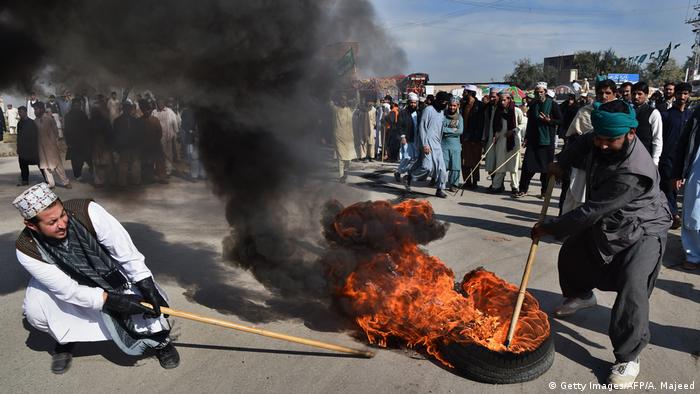 The Tehreek-i-Labaik Islamist party recently shot to fame after it sieged Pakistan's capital last month. For three weeks, the party activists blocked the main street connecting Islamabad to Rawalpindi, causing immense problems to the residents of the two cities.

Tehreek-i-Labaik's firebrand leader Khadim Hussain Rizvi demanded that Zahid Hamid, the country's then law minister, stepped down for committing "blasphemy." Hamid was responsible for amending electoral laws, including the wording for the swearing-in of lawmakers, who are required to recognize the Prophet Muhammad as God's final prophet.

The weeks-long standoff and the subsequent violent clashes between Islamists and police forced the military leadership to intervene as mediator. Pakistan's powerful military reportedly brokered a deal between the government and the protesters that forced the law minister to resign and the civilian government to "surrender" to a number of Islamist demands.

While Islamist violence is not a new occurrence in Pakistan, it is largely associated with the hardline Deobandi and Wahhabi sects of Islam. The Tehreek-i-Labiak party subscribes to the Sunni Barelvi sect, which follows mystical Islamic practices. 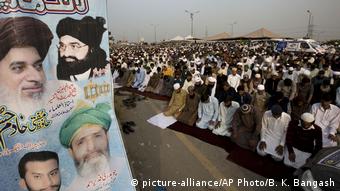 The Islamabad siege ushered in a worrying trend in Pakistan's already volatile politics. The Barelvis, who have traditionally been closer to a soft version of Islam, are increasingly using violent measures to assert themselves in the country's political sphere. Experts say it could be an impact of the overall "brutalization" of politics in South Asia and could also be an attempt by Barelvis to reclaim their political space from the Deobandi and Wahhabi outfits. The Taliban and other prominent non-Shiite Islamist outfits subscribe to the puritan, Saudi-backed Deobandi and Wahhabi sects of Islam.

Barelvism, which originated in the northern Indian city of Bareilly, follows the Hanafi school of jurisprudence. The founder of Barelvism Ahmed Raza Khan lived from 1856 to 1921.

The Tehreek-i-Labaik Barelvi movement emerged in 2016 after the hanging of Mumtaz Qadri, the assassin of the Punjab province's former governor, Salman Taseer. Qadri, who was the ex-governor's bodyguard, shot Taseer in broad daylight for speaking out in favor of Asia Bibi, a Christian woman sentenced to death over blasphemy allegations. Bibi has been languishing in jail since 2009.

Blasphemy is a sensitive topic in the Islamic Republic of Pakistan, where around 97 percent of its 180 million inhabitants are Muslims. Rights advocates have long been demanding reform of the controversial blasphemy laws, which were introduced by the Islamic military dictator General Zia-ul-Haq in the 1980s. Activists say the laws have little to do with blasphemy and are often used to settle petty disputes and personal vendettas.

At the same time, for Pakistani Muslims, especially Barelvis, the finality of the Prophet Muhammad is a non-negotiable topic. In the Barelvi sect, the Prophet's figure is more central than in other sects, for instance.

"New global technologies favor populist movements of Islam like Barelvism that allow them to capture the public sphere. Their cultural products provide people with an alternative to market-oriented materialistic life style. The personality of Muhammad, which is central to South Asian Islam, also provides the core of the Barelvi identity formation," Adeel Khan, who teaches Islam at the School of Oriental and African Studies in London, told DW.

But last month's Islamabad violence is a clear breakaway from the Barelvi emphasis on non-violence, pluralism and "soft Islam." For years, many Pakistani and Western scholars and rights activists have been promoting Barelvi South Asian Islam as a counter-narrative to hardline Arab-inspired Islamic versions.

Islamist militants - most of whom belong to the Saudi-Wahhabi sect of Islam - have attacked a number of Sufi shrines in many Pakistani cities in the past, killing scores of devotees, who mostly belonged to the minority Shiite Islamic group or the majority Sunni Barelvi sect.

Historians say that both Shiites and Barelvis believe in a wide cultural interpretation of Islam and seek inspiration from the Persian and Arabic saints, who played a role in spreading Islam throughout the Indian subcontinent. Many Shiites and Barelvis also revere mystics of Indian origin and regularly visit their shrines which are spread throughout India and Pakistan. These Muslim saints are equally loved by Hindus, Sikhs, Christians and Jews in South Asia.

The Wahhabis, which are a relatively small group among the Sunnis, believe in "puritan Islam" and consider pilgrimages to shrines outside of the Islamic faith to be against the teachings of Prophet Muhammad.

"Wahhabis are against any cultural pluralism, so they attack shrines, music festivals and other cultural centers that are not Islamic in their view," Dr. Mubarak Ali, a renowned Pakistani historian, told DW. The influence of Saudi Arabia had seeped into the psyche of many Pakistanis, causing an "Arabization" of their many traditions, he added.

Many Pakistani analysts, including Ali, say that the zealot Wahhabi groups and political parties not only frown upon pilgrimages to non-Islamic shrines, they also endorse the demolition of historical Muslim sites, and emulate Saudi Arabia in this regard.

But the rise of Khadim Hussain Rizvi and the Tehreek-i-Labaik party shows that followers of Barelvi Islam are using the same violent tactics as hardline Sunni groups. The difference between Barelvis and other sects appears to be diminishing.

Barelvi groups played a pivotal role in the formation of Pakistan in 1947. But since the 1980s, when the Pakistani state started supporting jihadist groups in Afghanistan, the Saudi-backed groups gained more influence in society and the state.

Although many lawmakers, including the ones from the ruling Pakistan Muslim League, belong to the Barelvi sect, the community does not have a distinct political representation in Pakistani parliament, unlike the Deobandis.

Due to the Saudi influence on Pakistani society, many youngsters whose parents belong to the Barelvi sect have converted to Wahhabi and Deobandi Islam in the past three decades. In addition, Deobandi clerics dominate the electronic media in Pakistan and have a greater number of madrassahs (religious schools) across the country.

After forcing the elected government to make a deal with them last month, the Tehreek-i-Labaik party announced it would contest the 2018 general election. The announcement is more bad news for former PM Nawaz Sharif, who was ousted by the judiciary on corruption charges in July, and whose party is under pressure from the military for attempting to assert its civilian authority, experts say.

Tauseef Ahmed, a Karachi-based political analyst, says there has been a shift in the military establishment's policy over its alleged support to Islamist groups, as it is now putting its weight behind the Barelvi groups and bringing them together to cut away some of Sharif's traditional Barelvi support in Punjab.

"The military does not like Sharif because the deposed prime minister wanted to normalize relations with India and Afghanistan and rein in jihadist groups in the country. Now, the military wants to stop Sharif's party from winning the 2018 polls by turning the Barelvi groups and supporters against it," Ahmed told DW.

Ahmed believes that by forcing the government to "surrender" before Tehreek-i-Labaik, the military has taken a huge risk. "The consequences of this appeasement will be catastrophic for Pakistan," the analyst said, adding that the more tolerant version of Islam has been compromised for political gains.

Nuclear physicist and political analyst Pervez Hoodbhoy says the Barelvi radicalization "will further splinter Pakistan along religious lines, and array one set of people against another."

"The already shrunken space for non-Muslims will shrink further, blasphemy allegations will be used to silence liberals and minorities, and mob violence will become yet more common," Pakistan's The News newspaper quoted Hoodbhoy as saying.

Supporters of Mumtaz Qadri, an Islamist hanged for killing a Pakistani governor, are constructing a shrine around his grave, local media reported. DW examines why Qadri has acquired a "saint-like" status in the country. (29.12.2016)